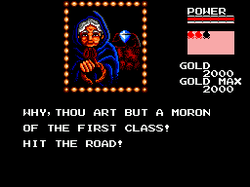 
​
+
Nice assortment of equipment (air boots, lifebar and wallet upgrades, herb that triggers when near death)
memorable characters (with well translated dialogue - some npcs mock you in old English!)
large world
nice intro and ending cutscenes
mixes Zelda 1-style overhead adventuring with autoscrolling action and platforming
mini-bosses, password save, good sound effects, a new music track starts whenever you buy new equipment, each boss has its own theme, makes good use of the limited PSG sound (and the FM chip in the Mark 3), good art direction, can trade HP for money with a vampire NPC (though it's a pretty bad deal),

-
Grinding for gold - you have to buy even the crystals (expensive too) - can fix this with GG codes
mostly easy bosses
no second quest
you can't move backwards in the platform segments (you can't even turn around!) and you get kicked out if you hit the edge of the screen
a bit repetitive (color swaps later on)
​only one weapon, you have to pause/enter a shop to see how much gold you're carrying, health is cheap while other items are very expensive, most dungeons are very easy and have poor enemy variation, no alternate attacks or secondary weapons, some bosses are just button mashers, some enemies are way too maneuverable for Kelesis, very slow sideways and backwards movement during autoscrolling sections, not very satisfying to hit bosses/get hit (no flash or animation)