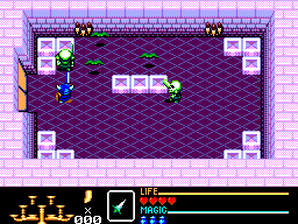 
​
+
Zelda 1-style gameplay (open ended game world, upgradeable lifebar, buy equipment with money dropped by enemies, hidden items)
Fast movement
Basic map system (shows your position and how many screens there are)
More fleshed out setting (with actual villages) and better dialogue than in Zelda 1 (dialogue is still pretty bland compared to Golvellius though)
Save feature (three slots - save at inns (usually located near dungeons)),
Nice intro, upgradeable shield (blocks projectiles), discovered staircases stay visible (however lit dungeons rooms don't stay lit), teleport back to the last inn you saved at (magic feather), GA 1 characters and GA 1 theme cameos (too bad you can't play as them or have the theme play in other areas), checkpoints at dungeon entrances and the last inn you saved at, fairly easy to find the clues needed to progress (though the clue about the ice bell being able to show you which rocks are breakable is only half right), decent gambling mini-game, somewhat comical (miniature ship in a chest), very little slowdown, shortcuts let you quickly traverse long distances in the overworld

+/-
Less forgiving hit detection than in Zelda 1
Need to hold down the attack button to turn around without moving (sensitive movement)
Can't move or attack diagonally
Can't block enemies moving into you
Enemies still hurt you during their invincibility time
Frequent health drops, static difficulty curve (doesn't change depending on which order you tackle the dungeons in - means sequence breaking isn't recommended unless you've already beaten the game before), off screen enemy respawning (need to walk a few screens away though), can't carry more than one golden apple/feather/oil at a time, pretty much rip offs some enemy and boss behavior as well as many mechanics from Zelda 1, you lose some money after dying (25%?), no monster mounts (see the beat 'em up games), shorter and easier beginning dungeons than in Zelda 1, you can escape from boss rooms if you're not ready to fight yet (more forgiving but also takes some of the tension out of the fights), no need to find dungeon maps, very subtle visual clues for where to use the magic rope to climb, ice bell is a bit overpowered in the lava area (kills all enemies, costs no magic to use), there's a Zelda 1 style maze in a desert but it's optional

-
Need to grind for money to buy items right away unless you head for the first dungeon (where you can get the axe and then find hidden stashes; enemies don't drop much money even later on) and sometimes later on for magic (no refill when resting though there are two magic shops on the overworld)
Short/narrow attack range + short knockback for you and the enemies (sometimes none if you hit them from the side) - helped by Alternate weapons later on but it means the game starts out pretty hard
No strafing or charging (holding out the sword while moving into enemies)
Can't upgrade the map to show more stuff (could've filled in important locations and detailed terrain as you explored more of the world; there's the balloon but it shows you a very zoomed out image of the world)
Somewhat generic looking enemies, enemies keep dropping health/magic even when you're full (not the case with horns/money), some trial & error (using the ice spell to remove a bush at one point (whereas earlier you'd use the axe to cut them down plus the ice spell has a different effect otherwise), no town signs (need to talk to NPCs and try to remember the name), finding the wall message in the destroyed town, finding hidden paths by cutting down bushes - sometimes no visual clues are given and the game is inconsistent about which bushes you can cut down (they all look the same), need to check the manual for item descriptions, some boss and enemy patterns, some hidden NPCs steal your money and there's nothing you can do about it (only 10-40 horns but why not have a gnome cameo from the beat 'em ups?)), can't carry more than 255 horns (wasting any presents you find if you're carrying that much already), backtracking (out of most beaten dungeons (can't use the magic feather in dungeons), if you get trapped in a room with a teleporter to the dungeon entrance in dungeon 8), some minor dead ends and red herrings, repeats music tracks and enemies a lot (also palette swaps enemies, some enemies also look different but act the same), safe spots against several bosses, no weapon upgrade from having full health (see Zelda 1), some annoying enemies (whirlwinds, cyclopses), only one item slot (can't keep an alternate weapon/magic active while using the main one - dumb decision to have the pause button simply pause the game instead of it bringing up the menu instead), no dungeon compasses (shows which room the boss is in in Zelda 1 and which rooms treasure chests are in in later games), weak magic effects compared to the beat 'em up games (except for the fire magic which looks great), one avoidable hit in the lava area (getting to Tyris), doesn't show boss HP