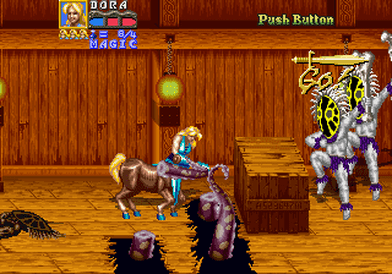 
​+ 4 different playable characters (3 of which are new characters), 4-player co-op, some nice touches (manually rescue people and some creatures from cells, catching enemies while they're talking or eating (the latter will throw their food on the floor), torch switches in dark segments, optional switch puzzles, eating squid tentacles after cutting them off, breaking free from being hung with a rope as the Gilius & Goah/giant combo, beaten enemies leave corpses), difficulty options (8 levels, starting HP - auto-changes the difficulty though, lives per credit, coin worth (up to 6), ), decent variation (two points with crossroads where you'll play through a couple of levels before the paths join back together again; good visual variation), very good animation overall, new and better mounts (stronger attacks, can jump attack - looks silly, can pick up stuff while mounted - even the small turret weapons!), pretty good use of scaling effects overall (vertical segments, breaking objects and destroying some enemies), adds a breakout/special move for each character (drains some HP when spammed), height differences in some segments (makes some of them too easy if you hold the high ground though), satisfying sfx overall, char select after using a credit, pretty nice spell effects, co-op move (go near a stunned enemy and attack at the same time), mounts carry over to the next level, running tackles, some shorter platforming segments, some decent in-game cutscenes, ranking system (same as in the prequel),

+/- More cartoony and colorful art style and less serious tone overall, doesn't keep Tyris (keeps but renames ax battler) and the Gilius now rides on a giant/big guy's back instead of fighting directly (he's the character with the strongest magic), Trix kind of sucks in 1-player (more of a support character, no offensive spell), the mounts are kind of overpowered (fairly easy to knock down bosses twice which gets them stunned and lets you do it one more time), no separate button for picking stuff up, no dodge or block moves (some enemies can block) - can destroy enemy projectiles though, no grab moves or advanced weapon combos (standing closer to the enemies makes you attack differently and you can still throw them, pressing forward changes the last attack in a chain a bit), features a bouncing cooked chicken in one of the in-between levels scenes, pretty short healthbar on normal, some (all?) chars can use a secondary breakout move while being hit (hit jump then attack quickly in a row) - doesn't drain life?, pretty silly how Dora can transform into a human while riding a mount or how the giant can ride mounts while Gilius rides him as well,

- Can't throw enemies into each other, increased number of lives per credit doesn't carry over to the next credit in-game (goes back to 3), same awkward vertical-focused jump (running beforehand barely affects forward momentum) - they did add a dive kick move though which gives you a bit more reach, not enough pits, some bland music tracks (sadly this includes some of the tracks that play right before a boss which is a bit anticlimactic), the game could've done more with the vertical scrolling parts overall (would've been cool if the dragon flight to the castle involved dodging/shooting/fighting enemies or if you were attacked during the elevator ride; they were on the right track in the cave level with the rolling boulders that you have to dodge), repeats some enemy and boss types too many times without making them much more interesting to fight, some scaling effects look pretty dated (when you move and the scrolling doesn't quite keep up, when the castle blows up in the end), sometimes annoying (quickly repeated screams and laughs) and sometimes unfitting sfx (hitting talactites in the cave, death adder's death scream is pretty cheesy), only one level of magic for each char (and the threshold to cast a spell is too high for two of them (the centaur/Dora has only low level attack spells, trix has only a cheap food spawning spell) - the game should've had lower and stronger level spells for each char and used the GA2 MD casting system to work better as a 1-2 players experience), no remixes of the prequel's music, some dips in the visual quality (the map screen looks worse than in the prequel (digitized poorly animated arm moving over a map), marketplace NPCs, ax battler's sword looks smaller when he walks without being in a fighting stance, manning the turrets looks pretty silly, having the "final battle" text and boss sprite flashing during the battle in the second encounter with him and how the orb around him and Gilius when he's finished off be super pixelated), would've been cool if the enemies petrified by the Gilius & giant combo's magic didn't auto-break so you could either break them yourself or throw them at enemies, no regular dragon or pink "bird" rides (there's a skeleton dragon though which is pretty cool), bosses stay stunned for a bit too long, can't jump sideways, the scrolling often doesn't keep up when running, so-so ending (Gilius sacrifices himself to take out Death Adder and then pops up in the next scene dancing with all the other sprites), Death Adder is kind of easy 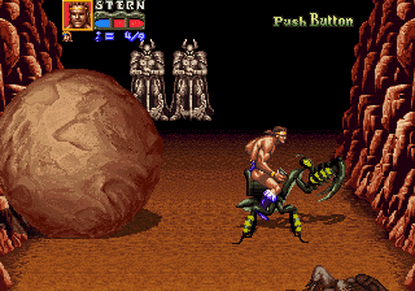