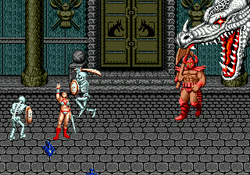 - Somewhat clunky controls (No invincibility frames for stuff like mounting on a beast (you also can't cancel the move) or getting up after a knockout hit from a boss), thrown enemies don't have an effect on other enemies, all magic is effectively the same except for the damage done, repetitive (several palette swaps and repeated bosses), only two attack moves when on a mount (running tackle and attack), short length, voices cancel out the music, doesn't make good use of the sound chip (shrill and tinny instruments, poor drums), very short second level