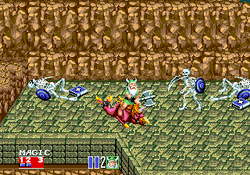 +/-
Limited continues, all magic is smart bomb style, easy to make the AI walk into pits (it is pretty amusing though), can’t use magic while being hit or getting up, "BLEH!" (even skeletons!), the screen scrolls much slower than you can run

-
​Very similar to the prequel, repetitive (overly resilient enemies with simple patterns, enemies ending up at the edge of the screen so you have to wait for them to move forward, palette swaps), short, the blue imps got replaced by lame wizards, lack of advanced combos, no enemy HP bars, can't change character after losing a credit, resting/unmounted mounts will run away after 10 seconds or so (annoying if they're at the edge of the screen where you can't mount them), no dragon mount, can’t jump on the z-plane, Tyris’s back attack can be canceled out by some enemies,