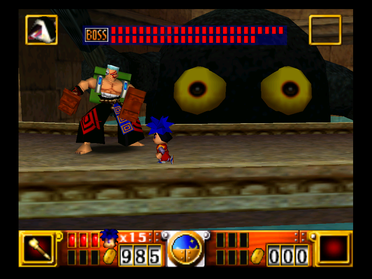 ​
​+
Some action adventure elements (minor puzzles, exploration in towns only here, some persistent tool-based progression (most are borrowed again), shops)
2-player co-op (2nd player can join in during levels and town exploration but not in some houses, one player can carry the other player - the ranged subweapon powers up when doing this, )
4 playable chars - can switch at tea houses in towns here (goemon has a double jump, ebisumaru has a mid-air butt stomp/bounce attack (also used to jump higher), yae can swim as a mermaid and her charged up sub weapon shoots homing projectiles and can lock onto three enemies at once (doesn't work underwater but the regular shots are free here), sasuke has a hair attack which can be aimed upwards, each one has a slightly different sub weapon and a different special weapon/tool) and via teahouse teleporter pads in most levels (this is a room "in another dimension" meaning you can't access the town when doing this - only teleport back and forth to switch) - can no longer switch on the fly (sometimes annoying such as in 3-1 where it seems you can use either of two characters but then have to backtrack and pick Goemon)
Day/night cycle (in levels you meet somewhat tougher enemies during night time and in town there are some night time only events, at one point you have to wait quite long to progress but it is optional)
Can exit any level or town at their entrance and replay beaten levels
Mainly 2D gameplay with some 2.5D elements (can't move on the z-plane in levels like in Tomba for example - only in towns and houses for some reason), bizarre/silly humour (sit com, slap stick, Japanese), rumble pak compatibility, charge shot (have it from the get go here), temporary rides in some levels (horse - can't jump though, tank - can't move it while firing without a second player though, robot/mecha - can jump and attack but is a bit clumsy), can run super fast in towns (hold B), less dead space overall (in the fifth area's town there's a lot for some reason but running super fast helps), much faster loading between areas, levels are somewhat more varied here in terms of platforming gimmicks and hazards, skippable cutscenes, giant robot battles return (the game shows combos when pausing during these), some memorable locations (most castles, underworld area), on foot race mini-games (second one includes some minor stealth although you don't use sneaking - instead you use the butt bounce jump at just the right time), some abilites gained that let you progress or reach new segments in previous (the chain pipe - destroys star blocks instead of being used like a hookshot here which is a bit less interesting, megaphone - create a platform of sorts one at a time (Wonder Boy III/Solomon's Key), sasuke's diving device which is the same as turning into a mermaid as Yae - his bombs are also used the same way as the chain pike in some segments (also not in an interesting way as they're just used to remove some walls blocking your way)), the giant robot fights are somewhat more advanced here (can't pull them towards you, can switch between two robots here to avoid certain attacks and use charge shots more often, the other robot is controlled by the AI while not used by the player but it's pretty useless), some interesting level gimmicks (the wave segment in the third castle, the large monster in the background of the fourth castle who partially destroys the bridge you're walking on and you'll later lure to beat the boss with), the game shows on the hub map if you've found all exits to a level or not (SMW), can keep playing after beating the game and visit an additional town in area 4 (via the bus stop), good bosses overall (final one has two forms), can unlock 4-player co-op (!) and alternative costumes (cosmetic only) but no giant robot duel mode boss rush here - collect all gate passes, voiced intro and ending,

+/-
More linear and formulaic structure (hub maps with one or two branching paths in some areas - one for each of the five main areas, mix of tilted view towns with some exploration and linear sidescrolling levels like in the SNES games - have to collect passes in each area to progress to the next set of levels, levels are more straightforward with one or two branching paths and a couple of detours for items in each (including dungeons/castles) - some have an alternate exit but you're generally told when and how to reach it by NPCs
Save points (inns and at the beginning of areas here, one slot per game)
Extra lives system (99 max)
The dolls work like in the SNES games here (silver ones upgrade the main weapon's range and attack power instead of your life bar - lose one level if you're hit by an enemy, gold ones upgrade the main weapon to full (third level) and restore both armor (which deteriorates when hit) and HP, elephants are checkpoints here)
You'll revisit previous levels with new enemies in them for some quests
The auto-scrolling giant robot segments were removed (could've been improved instead)
Respawning enemies/hazards in some segments and if you move back and forth enemies will also respawn (health items seem a bit less common but you can move back and forth to make more appear), much longer castle levels than regular ones overall, more coins but each one is worth less here, a bit harder in the beginning and much harder overall (3 HP instead of 5 here which also can't be upgraded (besides the armor and revival items which can technically increase it to 11 but it's temporary and only the armor can be restored during a level provided you find a golden cat in it), many death pits), can't attack upwards while crawling as Ebisumaru and Sasuke (wasn't really useful in the prequel though), dropped items disappear after a few seconds, no slope sliding physics, shared HP and armor for all chars, no strafe move and no dodge move, no energy refill after bosses, 999 max money capacity instead of 9999, no laugh track here, buying a better "health restorative upon death" replaces the one you already have, doesn't re-use any of the mini-games/missions from the prequel, can block some regular projectiles with your attacks but not others, can't cling to and climb ledges here, can attack enemies through walls and platforms, can't shoot the chain pipe upwards nor downwards, can't attack downwards in mid-air (rarely an issue though), hide 'n seek mini-game, can't split up in 2-player mode, tiptoeing is still painfully slow but never needed, no thieves in the towns here, the villain looks like a DBZ character, no hot baths (health restoration points), ​

-
No town or level maps here
Some control/interface issues (attacking right before landing from a jump cancels the attack, a bit harder to read how close you are to falling off of a platform edge while moving than in the 2D SNES games, sometimes loose camera when moving vertically, somewhat unresponsive underwater controls, no quest log/journal feature although it's rarely needed here, some text can't be sped up - most story-related dialogue (and cutscene dialogue is rather slow here), can't speed up time/skip ahead to night or day time - at some points there are night time specific events in levels)
Some trial & error (some later platforming segments and most boss patterns, run into an invisible wall dead end if you take the water path in 4-2 - apparently there's a bus stop here but you can only take the bus after completing the game, can't dive and explore some deep waters (4-1, more?), some shots from off screen, some leaps of faith (can't look up/down and sometimes there's a death pit where you'd expect to fall down to the path below or a lethal trap coming from above), in some levels you can end up going in a circle from switching from one branching path to another mid-way or exploring the end of a path backwards - could've been helped with signs which the games does use in some levels, the iguana man trading quest in the third area - not hard but could've been more interesting), fewer moves and weapons per character, no main attack combo here (wasn't very useful in the prequel but still)
Comic sans-like font used for the chapter splash screens
Still no translated signs outside town houses and so-so object interaction inside them (there are also some invisible walls inside houses as well as between a few buildings and walls)
Crappy giant squid mini-bosses underwater, enemy designs are less detailed overall than in the 2D games, some dated looking 2D elements in the visuals, some meaningless dialogue choices, can't block enemy projectiles using your own (coin throw) here, difficulty spike at the wheels segment and the mushroom gathering quest in the third area (the latter is also weird in that you're told to look for rare mushrooms but really you're supposed to collect all 30 in on the levels (also time consuming as it doesn't end automatically after getting all of them and you have to backtrack through each path of the level and then go back to the beginning or die to finish), maneater road is easier), overly drawn out second boss (the fish you have to use traps on), somewhat slow block & boulder pushing, sometimes poorly translated text, can't permanently upgrade your HP nor your attack power here, missing some abilites/tools seen in the prequel (flute - teleport to previous towns (no reason to here sadly besides getting the alternate costumes), no camera item+meat-saw hammer+mini-form, no sword shield move, no freeze shot), repeats some enemies several times throughout the game and has a few too many corridor-like segments, you'll keep finding more of items that you already have a full stock of (gold when at 999 for example) - here the game would be a lot easier if you started getting health and upgrades all the time though but the ratio could increase a bit (or they could've increased capacity to 9999 and let you gain a 1-up for each 1k or made stuff more expensive in general), some backtracking (in various quests/missions, some towns have two exits but can only be entered via the first one), boring demon (tengu) hunt quest in the fourth area, as Sasuke's main weapon is upgraded and shoots projectiles you don't get drops from enemies unless you hit them in melee, the quest where you work for a bit at a call-in counceling center for children is interesting in theory but the choices are so poorly translated and the sequence so unforgiving that it becomes annoying instead, no vocal tracks here (in the JP version there's one vocal track for its intro accompanied by a different cutscene which was removed in the localization), 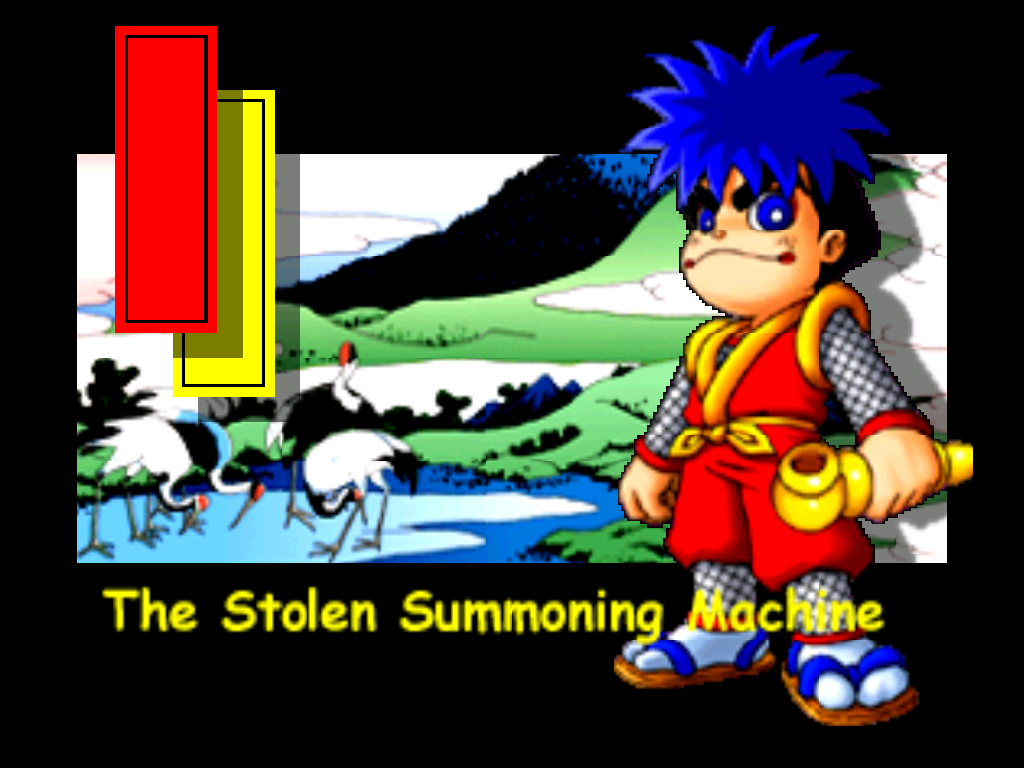 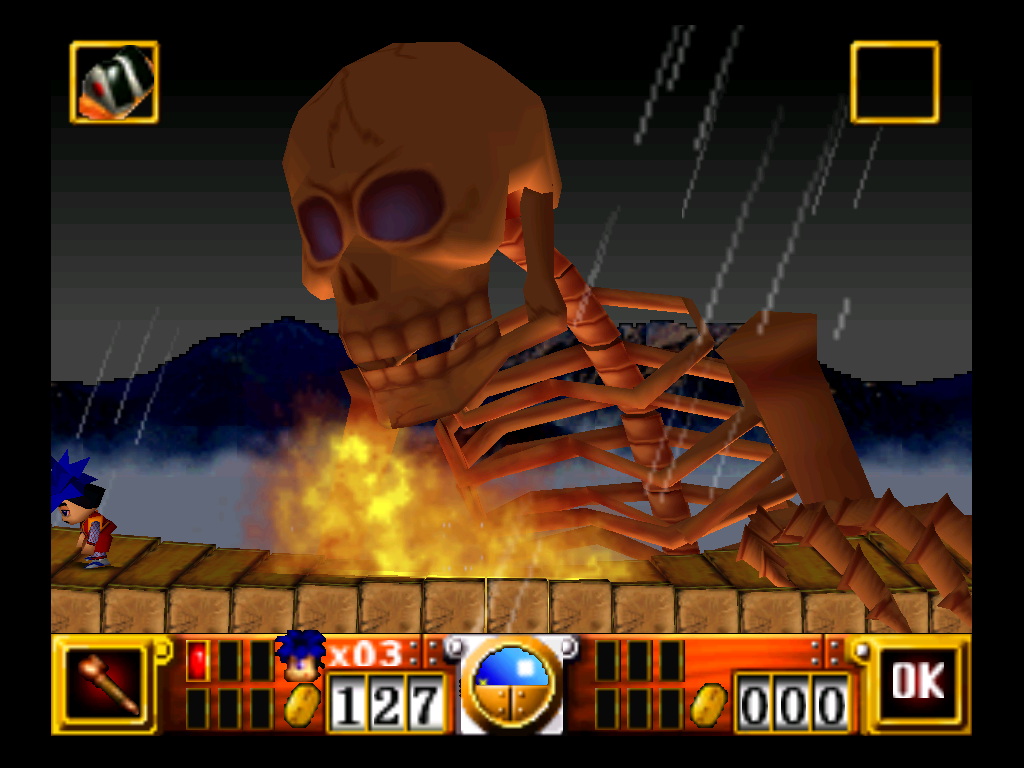 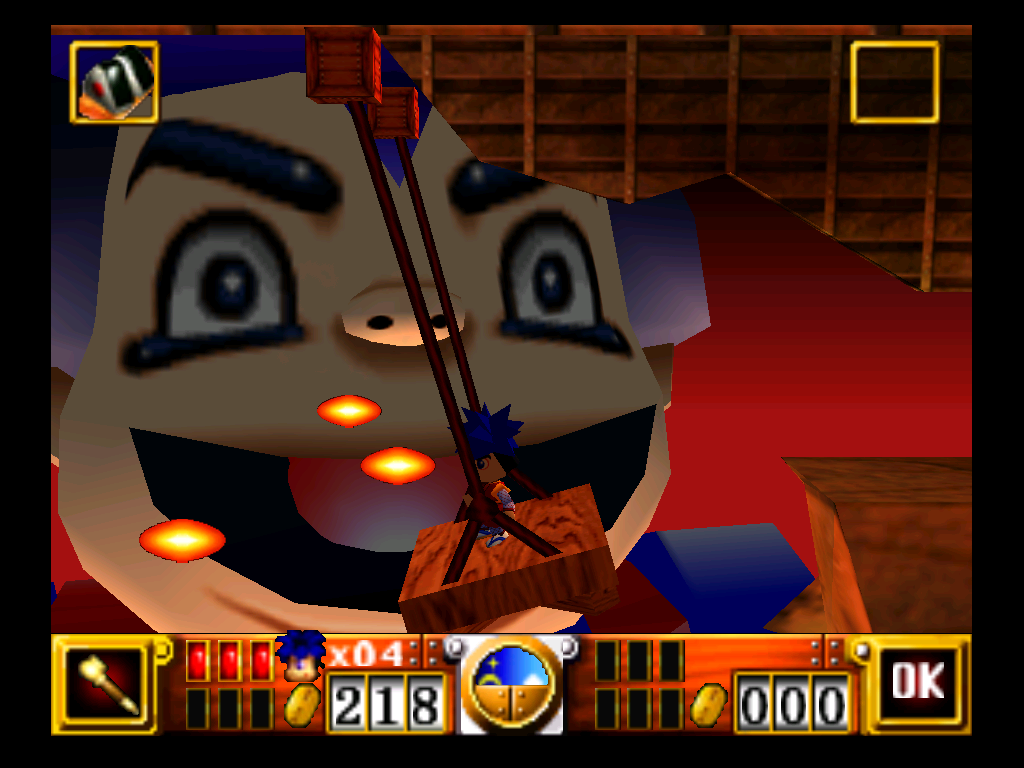 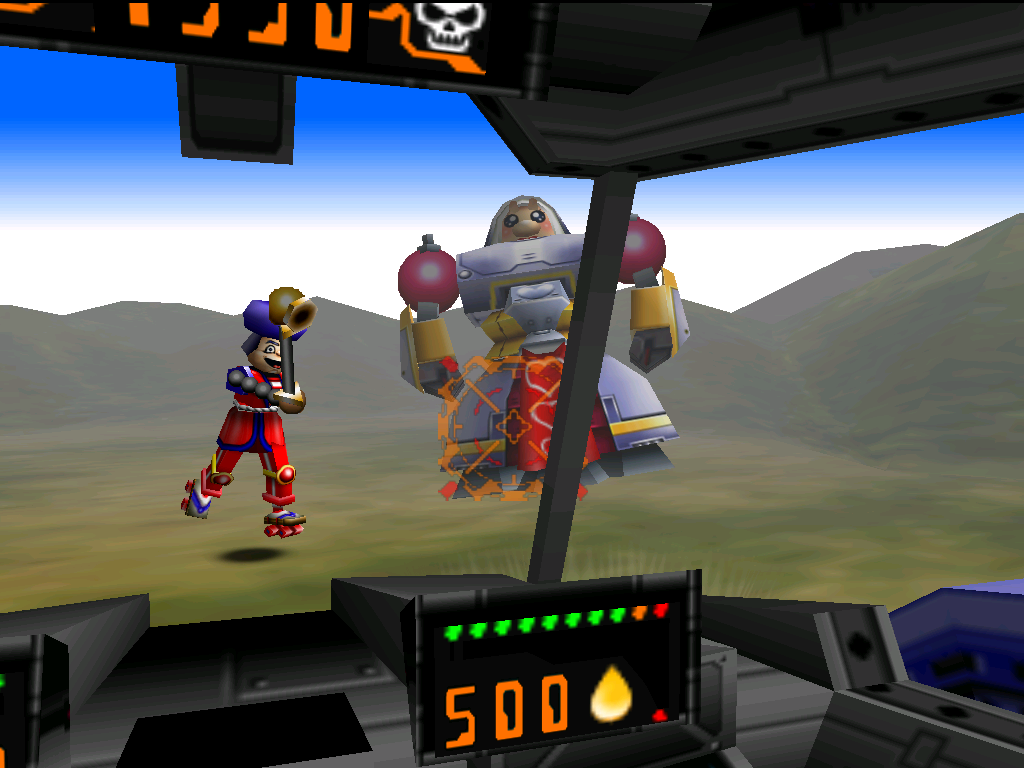 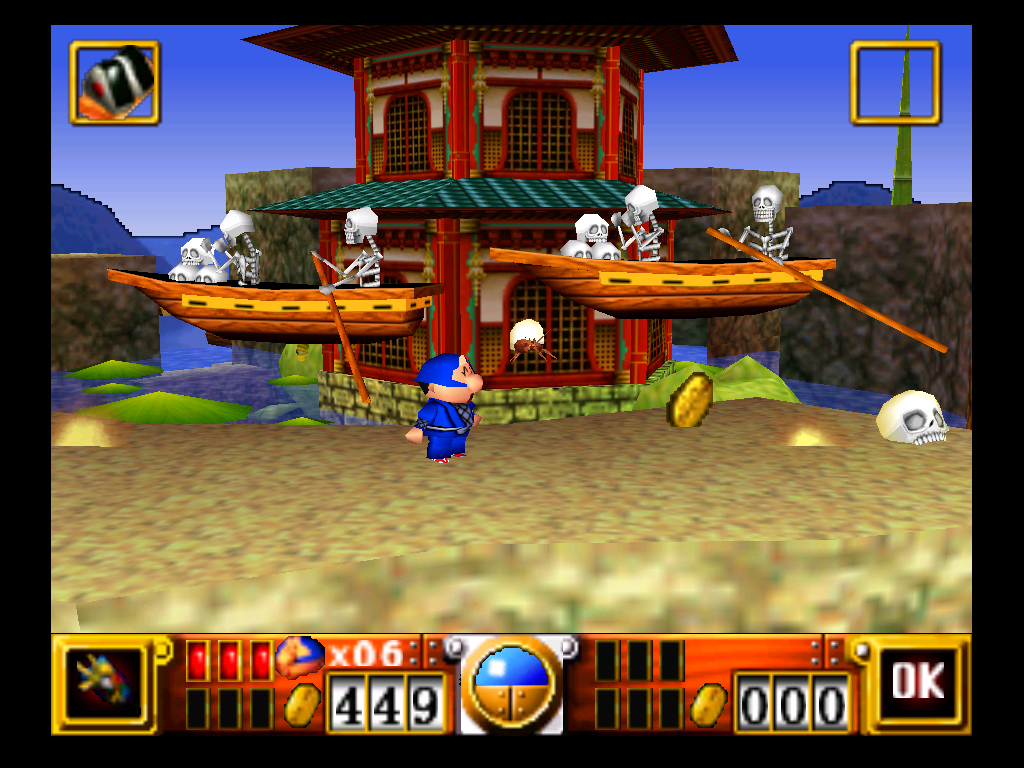 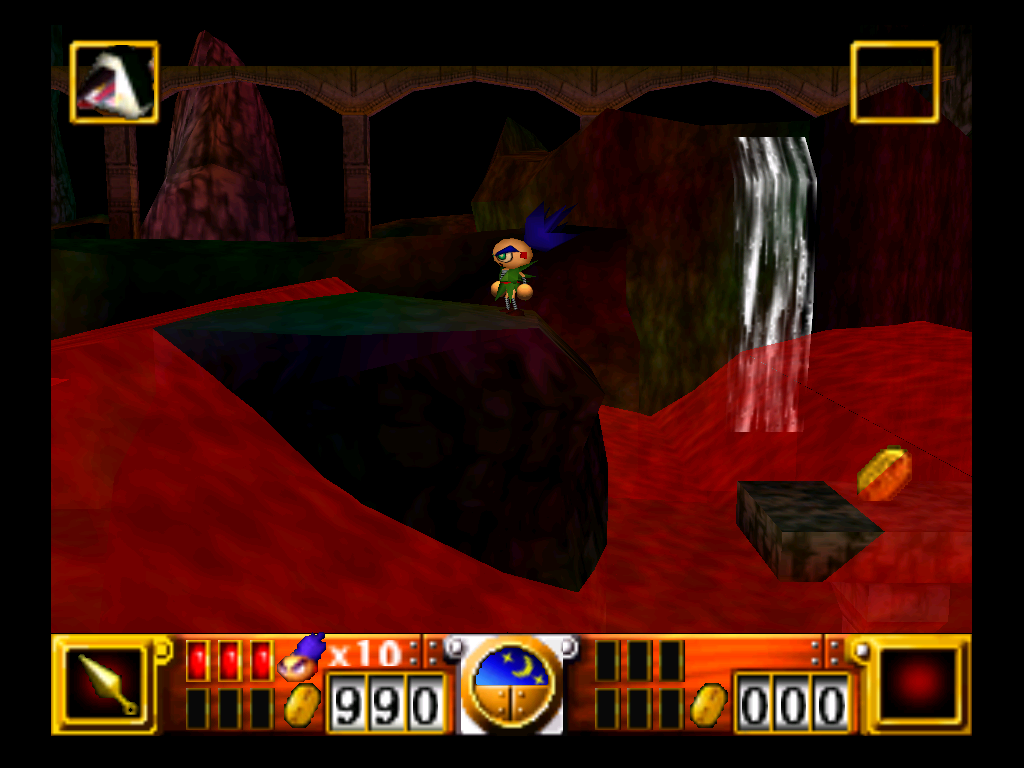 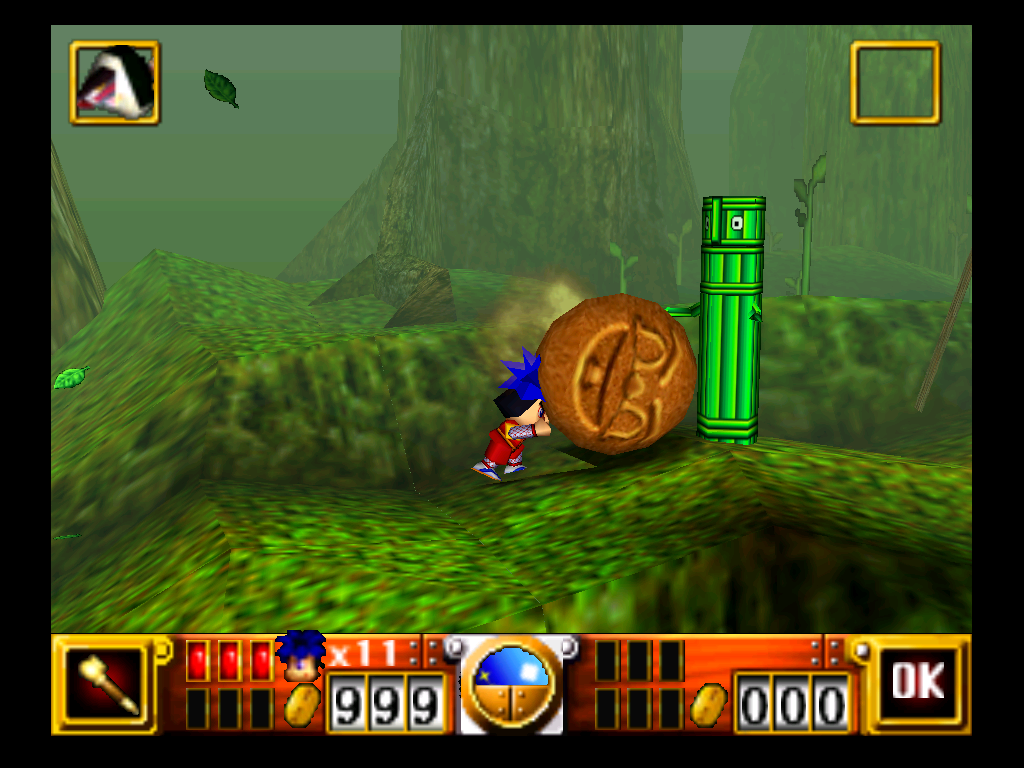 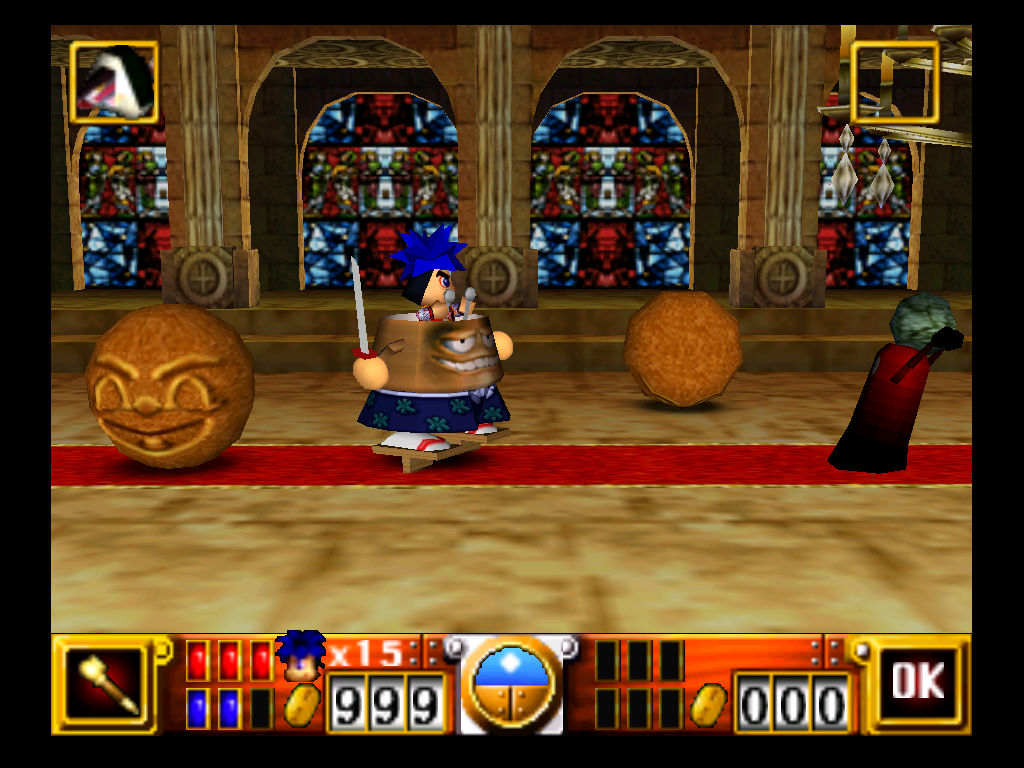 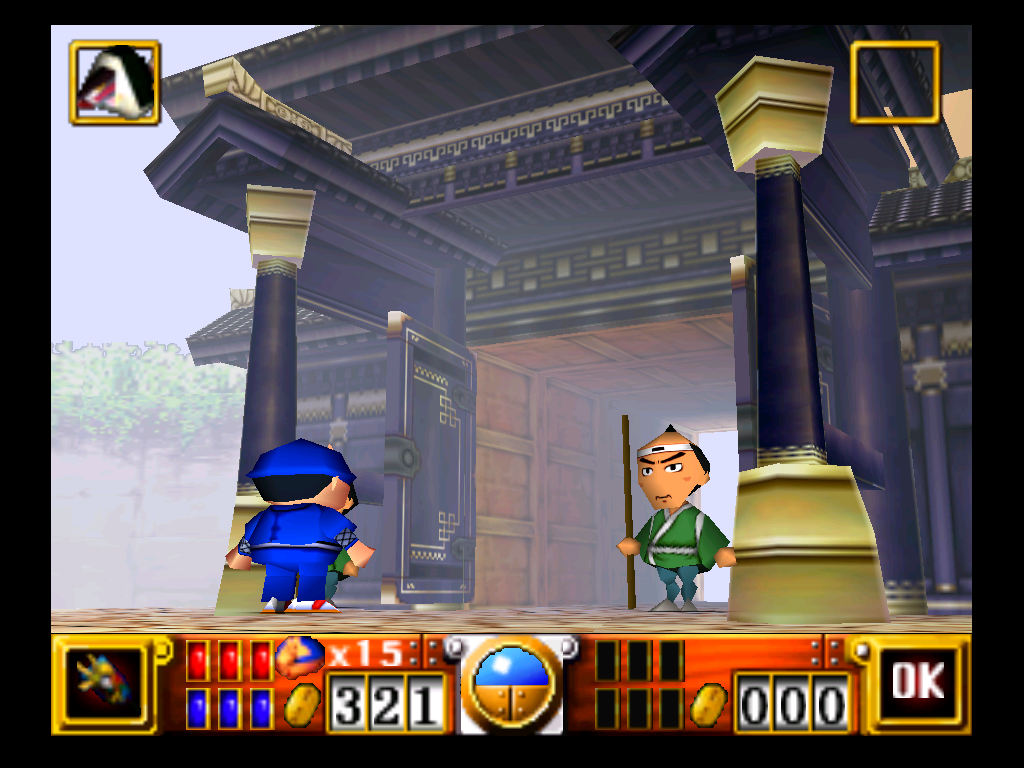