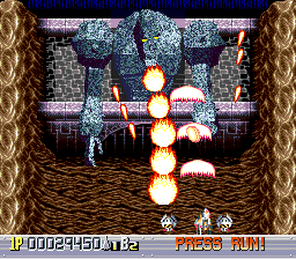 - Somewhat short, can't adjust your speed (characters have different speeds and the two slow ones aren't up for the task really), some annoying sounds, no music/voice in between levels, uneven visual quality (art direction is all over the place, some single color background segments, some tacky stuff like the zoomed in boss explosions and most polygon enemies), somewhat uneven difficulty (two bosses in a row on every level, some mini-bosses go down fast), trial & error (fast boss attacks, enemies popping out of the background, sped up part in the pyramid), only three weapons which are also very similar, bosses before main bosses have no music theme