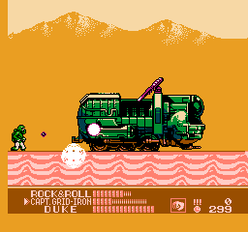 
+ Password save (one per mission, 2-3 sub levels per mission), six different playable characters (choose between three to switch between on the fly during a mission (need to pause though), sixth char/captain hawk is only available in the final mission), shoot while moving, pretty good variation (bosses, enemies), very good bosses overall (some with 2 phases), cutscenes between missions and even sub levels, vehicles in some levels (helictoper, crawler (works like the ball in Metroid 2)) - these have unlimited ammo, upgradeable weapons (spread and more damage) and lifebars, hidden paths (breakable walls), temporary invincibility power ups (can't save them for later though),

+/- No life refill after bosses, press Select to switch between melee and ranged weapon (game would've benefited from more buttons so you could swap characters without going into the menu), ammo-based ranged weapons (except for snake eyes?), time limits (pretty lenient), life drops are fairly rare later on but refill all health, walk in water without taking damage or dying (no effect on movement either), jump to shoot downwards, no female chars, somewhat slow falling speed when jumping (can be good and bad), optional grenade attack if you press up and attack while in melee mode (poor aim unfortunately so it's only good vs. a few enemy types), climbing (pretty stiff, ninja gaiden 1-style), Rock 'n Roll's weapon is a bit overpowered (he also takes a lot of damage from enemy attacks though)