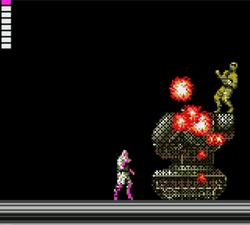 -
Can't replay beaten levels (means you have to take a specific route to get all of the HP upgrades)
Slow horizontal movement with vertical-based jumps (see RoS, Contra etc.)
Trial & error (off screen shots in wood lands, specific order through levels to grab all items, one near pixel perfect jump, cheap enemy placements here and there (can't look up/down), some very fast enemy attacks, boss patterns)
Doesn't show bosses' health bars
Uneven graphical quality (some background parts and sprites look half finished)
No options menu
Green's kamikaze tech kind of sucks (costs all techs you have + a life just to kill all enemies on screen; use red's instead)
First ninja doesn't have a ranged attack (shuriken) or somersault - feels like padding to not have basic abilites from previous games (similar to MMX)
Slight delay before you can start charging another attack as yellow (if you press too soon then nothing happens instead of the new charge simply being delayed like in Mega Man)
A bit short (5 levels)
Wood lands boss (red demon head) is very easy if you have the blue ninja and there's a safe spot at the valley boss (blue waterfall ninja)
Need to repeat some slow parts at least once in the final level to beat it (some tedious vertical platforming and a part where you need to pause and use a tech over and over to get through some breakable blocks) - more times if until you know the correct path through the maze
Pretty bland ending