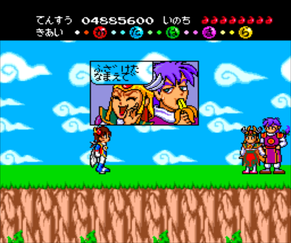 ​
​+ Charge attack which changes depending on how long you hold it and what you've picked up, pretty good variety of weapons/projectiles (5 strong and 5 weak attacks+1 smart bomb - the two strongest ones are very similar in function though), good use of color and decent animation, good art direction overall, falling down a pit hurts you and bounces you back up instead of killing you instantly, life bar, little to no slowdown despite many sprites on screen (except for against one of the bosses), pretty good variation, good mid-air jump control, spinning shield power up, temporary invincibility power up (makes your sprite stretch vertically), slide move (can only be canceled by jumping), NPCs which refill your life and maybe something else mid-level? - JP text (sometimes these are hidden), decent cutscenes

+/- Autoscrolling platformer/run 'n gun & platformer hybrid gameplay (see Atomic Runner), life refill after bosses, no auto-fire by default (the PCE controller has a toggle for it but it's still mapped to the same button as charging up your weapon so you don't really want to use it), temporary gun drones, pretty short levels, some of your attacks are overpowered (the last ones are basically smart bombs and the final almost kills bosses in one hit), boss rush in the final level, hidden difficulty options in japanese (select+b+a at the title menu, four levels, number of lives?), final boss uses your own weapons against you (albeit in slightly altered form), weapon is reset to level 1 if you die (not that hard to recover though), ​

- Some control issues (can't duck - pushing down makes you slide forward, jump height only has two settings - low or high, can't shoot up/down/backwards, too hard to time the charge meter so that you get the attack you want), no weapon inventory, trial & error (cheap lightning attack by the final boss - have to time a slide move precisely to not get hit here, final level - can cheese it by moving slowly and letting your weapon charge up though), safe spot vs. the lvl 4 boss, sudden difficulty spike in the final level, a bit short
​