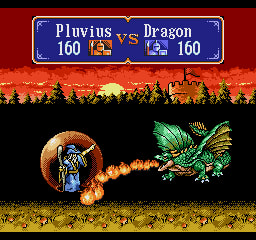 ​
​+
Pretty detailed TB war sim (choose royal family to rule with (4 different ones)+advisor (4 different ones)+scenario (1-4), chars gain stats (4 different stats: domestic (affects cultivation and protection against sabotage/plunder), military (combat bonus), fame (diplomacy), charm (give food>province loyalty and maybe something else?), military/domestic/diplomacy/vassal command categories with 4 commands each for what you can do in each turn, province and army management (land cultivation+trading+food and pay upkeep (every 3 months for hired mercs/monsters), protect your people by taking precautions against natural disasters - also helps against enemy attacks) - all done via simple menu selection and how well you're managing them is represented by the loyalty/flag stat (can also give excess food to the people of a province to increase it, loyalty affects taxes collected+food production and if 5th units stay so it's quite important), )
Some interesting mechanics (flank and rear attacks during battle, can break and build (knights) fences during battle, can ask the advisor for help and get a couple of different lines each turn, age factors into stat growth (stops around 60) and eventually a char might die (70+), charm stat (heart) makes "give good" more effective (more loyalty gained) - supposedly makes it easier to recruit new units too, fame lets you carry out secret missions more successfully (defection of a vassal via bribe or demanding a ruler's surrender) and recruit more vassals from other factions, can hire mercenaries or monsters (replaces your "5th unit" (wizard) for an army), can send spies to identify a province's fifth unit and see if there's a special item there (dice roll), can plunder a province for gold - you send spies and don't enter battle (dice roll), can sabotage a province to damage their lands and weaken their ruler - you send saboteurs and don't enter battle (dice roll), can win battles in 5 ways - killing the enemy, capturing the enemy flag, starving the enemy, making the enemy retreat, holding out for 5 days if you're defending, after a battle you can hold the enemy vassal for ransom (gold or food) - if it's a ruler you can try to recruit/set free/banish from the world, day/night cycle during battle (need to bring food to keep fighting), the wizard Empyron has action-based growth for his attack - no other units have stat growth sadly, status effects for some 5th units' attacks?),
Save feature (2 slots)
Nice intro and ending cutscenes (artwork, text and some minor animation, quite long; slightly different on SNES),
Better overall visuals than in the PC versions (the map is a bit bigger on the PCs), decent battle animations and the sprites are fairly large (about on par with Master of Monsters)
2-player co-op/vs (not sure if you can win as allied), message speed option, can still cancel after having accepted to move during battle, can toggle battle animations on/off (have to turn them off every battle though if you want them off), some flying 5th units, auto battle option (have to sit and watch the battle and press at times to speed things up though, also the AI isn't that good),

+/-
Non-linear structure in that there's a world map split into 30 territories/provinces and you have control over where to search or fight and who to communicate with at any point instead of going through a linear series of battles
Lords don't participate in combat (their stats contribute like in HoMM)
Gameplay demo option (shows a full scenario),
Collectathon element - need to get 6 magical gems through conquest and become king to win
Wizards and other gem-based 5th units have to rest for 2 months/turns after a battle (the upside to gem-based 5th units is they can be summoned from any province and are usually stronger than the others)
Can't move troops from a province if it doesn't have a 5th unit which isn't a wizard (can choose not to send the 5th unit though) - this along with only being able to change the lord of a province from the home province is probably to balance the game against rushes or scorched earth tactics, random elements to the challenge (using Search on enemy provinces can sometimes yield special items that will drastically increase character stats (can choose which one to give each to) - rarely happens but you can save before using it to exploit this, encounter events (a 5th unit creature can suddenly appear and join one or more of your provinces in a turn - the water dragon only appears if you rule morally, kind creatures can increase a stat or resource/mean creatures can do the opposite), fires/floods/winter storms/plagues/volcanic eruptions will hit a few semi-random tiles a few times per month (most events only happen at certain hemispheres such as winter storms in the far north during winter, mid west provinces can catch fire after a hot summer, southeast gets flooded, volcano is in the southwest), selling and buying price fluctuation, fence building during battle can fail, ), can see when another family/faction attacks someone else or when one of their lords defects (changes family), can only ally one other family at a time, your army is always divided into 4 or 5 stacks during battle (King's Bounty?), can dismiss only the 5th unit in a province, can't spend more than 10 gold on cultivation or protection to get more done in one turn, can't move through tiles occupied by friendly units, can't choose not to hold a vassal for ransom after beating them in battle, difficulty is determined by which family you choose (no other difficulty options and the fourth scenario isn't actually harder if you play as Blanche or Lyle), can have the AI take over the handling of any province (entrust command; not good in general because the AI is dumb but can be convenient for some provinces in the late game), can choose who in a province to target with a bribe (defection) only at their home province (the vassals under them), no penalty for failing to plunder/being caught besides spending the turn - a bit OP?, the starting conditions of each scenario are the same regardless of your previous performance (families 3-4 are replaced in each one according to the game's canon of events, the objective is the same - be the last one standing and unite the gems) - some continuity based on your actions would've been cool, can send saboteurs all over the map but only send troops to a neighbouring province (plunder is as limited as sending troops), allying is generally useless? (seemed ok the one time I tried it, no economic or military benefit though other than not having to worry about being attacked by that faction in temporarily vulnerable provinces, can't ally the Lankshire family - basically the villains), an enemy faction can move its home province through your territory if you surround their home, resources and armies are capped at 999 each for each province,

-
Some control/interface issues (can't spend a movement point to simply turn a unit around after it moves (knights can do it by attempting to build a fence and it doesn't cost any movement points however if there's an enemy in the way it won't work), pressing cancel during the game setup takes you back to the main scenario menu instead of the previous sub menu, movement during battle is a bit clunky in that if you move the cursor so that you'd use up a unit's movement points but change your mind then you have to cancel the whole move and redo it, some icons aren't explained in-game, the game and manual don't tell you the personality differences between the 4 advisors when picking one though you can sort of guess by their introductory line and title, can't dismiss regular army units, can't automate land cultivation or protection increasing for a province by setting a certain amount of gold to spend each month on them - leads to more busywork, unskippable event animations?, the game doesn't show a unit's movement or attack range as a field during battle (like in Langrisser or Shining Force for example) - does show it when viewing a 5th unit outside of battle so they should've added it, can only offer to ally from the home province, if you send the 5th unit along with other troops in a troop movement then you have to send the whole stack - can't split 5th unit stacks, the game doesn't auto-move the cursor to the nearest reachable enemy troop after picking attack, archers can't shoot diagonally - wizards also can't do it from one tile's distance but they can do it from further away (weird), wizards can't attack in melee - only defend, having to use View to check which of your provinces have a 5th unit gets a bit tedious - could've been displayed right away, the selection cursor on the map screen is a bit slow)
Some trial & error (ruling provinces remotely with your player char halves the bonuses that char would bring to it if they ruled it directly - this includes attacking with that province so it's generally better to assign another lord to it, wizards are strong in melee and archers are pretty good too, some 5th units are kinda weak (ogres start at ~30% strength compared to some others) and you can't see this when recruiting for some reason, wizards and archers don't counter when shot at by archers, the game doesn't properly show the effect of a 5th unit being disloyal and ravaging your lands as it happens (same with natural disasters) nor can you see clearly how likely it is to happen, can send food/gold along with troops in one go with the move troops command, can trade (but not transport goods)+entrust provinces+view provinces freely without spending a turn, food and gold profits automatically update at the beginning of a month rather than continuously throughout it, can't see the success chance of actions like defection or plunder before attempting them - see Master of Monsters?)
No deployment phase before a battle
Repetitive and basic in some ways (The day/night cycle doesn't affect unit behavior or strength during battle (some could've been stronger during night for example), can't destroy bridges/castle walls/boulders/woods (no siege weapons), no way to control the progression of hired 5th units available (each province has a predetermined pool that it draws from) - seems rather slow to change, no siege weapons, can't change your army composition besides the 5th unit (always 1 horsemen stack/2 knights (sprites are slightly different but they're functionally the same) stacks/1 archer stack), can't restructure your castles or their surrounding area outside of battle)
No story development during a scenario
The music doesn't make full use of the hardware (still decent-good overall besides the drums and it does use PSG, some grating instruments), the top down battle graphics are pretty basic, the ending is exactly the same no matter which ruler or scenario the player chooses, human 5th units sometimes desert you for no reason?, the enemy AI is often pretty stupid (at least in the first scenario; you can bait the computer into using their gem in a battle and then immediately retreat - only to immediately attack again with your own wizard, ​sometimes makes random decisions in battle, doesn't use trading enough to its benefit, doesn't attack your weaker provinces enough), almost impossible to make the last faction surrender even when it's completely overpowered - the challenge peeters out as you get closer to winning rather than climax at the last battle