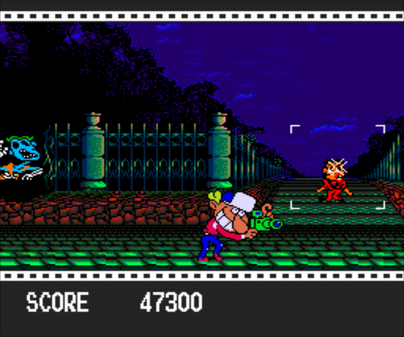 
​
​+ Created a new genre (photographer/paparazzi sim), great visual variation, comical tone, many sprites on screen with little to no slowdown, aiming speed upgrades, pretty intense "action", each level has a special objective which yields more points (stated in a short briefing) - you sometimes don’t need to photograph it to reach the point requirement though,

+/- Auto-scrolling levels, mini-game style boss at the end (unfortunately since you get infinite film here you can just spam the button to be able to see where he'll pop up in advance), resource management (film), features stereotypical caricatures of white and black people and sexualization in some levels (one man and several women), no run or dodge moves, improssible to get a perfect score on any level?, some celebrity and art cameos

- A bit short, heavy trial & error, oftentimes arbitrary requirement for getting the best reward from a shot (another roll of film) - there will often be a harder to time scene happening at the same time, a bit repetitive, default aiming speed is a bit too slow at times, can't aim near the left edge of the screen and can't turn around, controls would've worked better with twin stick controls (control the crosshair and an avatar at the same time like in Cabal), no difficulty options?, you don't get to see your actual photos after finishing a level (your boss holds up a roll of film and if you've captured certain important scenes they are roughly shown on it) and there's no grading of the quality of individual shots,