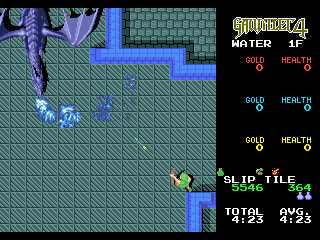 +
4-player co-op (other players can join in during the game), 4 different playable chars (warrior - physically strong but slow and bad with magic, valkyrie - well-rounded, wizard - physically weak and slow but good with magic, elf - fast but shots are weak+pretty good with magic)
Quest mode (password save - pretty long though, exp point leveling with manual stat allocation (hp/long range AP and speed/short range AP/armor/speed/magic attack/smart bomb power) - lets you play it your own way though some stats are more important than others, gear shops (gold is used to buy stuff here while it's just for points in arcade mode, the interface shows if an item is better or worse than what you have), higher and lower floors and some are also interconnected via more than one stair - you're supposed to beat 4 towers before going into a castle which is the last area (beat the boss and collect the coat of arms item in each one, can backtrack and re-enter floors), elemental themed towers (fire=lava tiles, earth=tiles that slow you down, water=slippery ice tiles, air=air streams that slowly move you around if you stand still, castle=confuse/semi-random aiming+movement tiles), other special tiles: damage (see FF games), no shot, no magic; some cool items specific to quest mode: warp wing - escape the dungeon back to the hub area/marketplace, heal drink - health potion that you can save for later use, fight ring - manual melee attack, float ring=hover over slow tiles and teleporters (still can't shoot above no shot tiles and you still activate stairs+confuse tiles), heal ring=stops health deterioration+protects against damage tiles, mirror ring=fire reflective shots)
Impressive music (the new tracks were added to all modes)
Smart bombs (blue and red potions)
Many sprites on screen with very little slowdown
Some ability gating in quest mode (required: float ring; optional: mirror ring to get to the extra (movement) speed shop in wind tower, mirror ring or fight ring for one of the paths to a switch in earth tower floor 4 (fight ring is in water tower and mirror ring in wind tower but I think you need the float ring from earth tower floor 8 to get to the mirror ring; the rings can be bought but are expensive at 20k each) - I somehow cleared floor 4 of earth tower without either of these in my run, mirror ring+float ring+weapon speed 13 or more for the secret merchant selling ultimate weapons in 1-player - not needed in co-op?)
Some interesting level gimmicks in arcade mode (teleporters (same screen, some are one way only), horizontally looping floors, floors where the walls are all exit tiles, on some floors your shot either stun or hurt other players, destructible enemy spawn points and (some) walls - the former was later used in Soul Blazer and Diablo 2, basic switch puzzles (if you hit all switches/"trap tiles" on a floor in quest mode then it will be cleared of monsters when you re-enter it) - on some floors you'll free a bunch of monsters when stepping on them)
Temporary stat increase potions (speed, armor, shot power and speed, magic power, fight power) - these last until you die
Some interesting enemies (sorcerers fluctuate between visible and invisible - similar to Zelda, death enemy is only vulnerable to magic (can still be destroyed by allowing them to do enough damage to you) and the thief only to physical attacks (thief steals gold and potions, prioritizes the wealthiest player), lobbers who track your movement with their rocks, )
Difficulty options in arcade mode (8 levels of difficulty in arcade mode, up to 9 continues+starting health per credit/coin - can insert several to start with up to 18k health, mania mode="a hardcore challenge")
In-game text & voice hints (optional) - there are also minor hints in-between floors although some of them are useless
Record mode (a survival mode version of arcade mode with more detailed ranking of your performance after each floor+password save+99 credits but 500 health each)
Later on in arcade mode there are more locked doors than keys on each floor so you have to think about how to best use them (can also save keys for later floors)
One shortcut path in each tower in quest mode (as you clear floors it becomes more accessible)
Temporary invisibility power up (you'll be ignored as long as you don't attack)
Some decent-good puzzles in quest mode (have to lower your ranged attack speed at a couple of points to be able to follow along with a shot and make it hit a destructible wall, using the float ring to pass over some obstacles, have to keep the crystals unlit during the final boss - similar to Zelda 3 ganon, good: getting to the ultimate weapon shop on floor 1 in the castle)
Decent bosses (two phases; they're all variations on the first one though)
Adjustable movement and ranged attack speed in quest mode - fast paced gameplay when upgraded
Can speed up text on a per message box basis (start)
Two endings in quest mode (can choose no when prompted and then you'll fight the boss one more time with a slightly different pattern and less HP - the bad ending (yes) is cool in that you turn into the immortal dragon and get to control it to kill the previously cursed adventurer)

+/-
Partially non-linear structure (choose between 2-4 exits on some floors in arcade mode, choose between the 4 towers from within a hub area in quest mode )
Hunger mechanic of sorts (your health is constantly draining - not in quest mode if you use the heal ring found early on in fire tower)
Maze levels with locked doors (mostly small floors though)
Arcade mode emulates the first Gauntlet game except the level order is randomized each time - this mode is endless (play for score)
Both players can't pick the same class
Can't shoot/throw while moving
Odd and a bit scratchy sounding voice samples (there are quite a few of them at least and they add some personality to the game - the commentator is both a guide and something like a dungeon master)
No knockback from enemy attacks in arcade mode - added when shot by demons in quest mode but there's still no invincibility time (adds some challenge to the earth tower where you can fall down on some floors)
Rate of fire is faster the closer you are to your target (see Gradius)
Bonus levels in arcade mode start off pretty lame - just a timed maze with treasure in it (later on there's a stat potion you can find and even later there's a thief you need to take out to get it)
No dodge or block move
Battle mode (2-4 player vs - kinda weak but you can use your password saved chars from quest mode which is kinda cool)
Some negative power ups in quest mode
Can't access the inventory while fighting the dragon in quest mode
Can sometimes open a door to an exit by just hanging around on a floor in arcade mode - only way to get out if you wasted all your keys on some floors
Limited arcade mode inventory - 12 slots for bombs/keys
Easy to farm for food/keys/smart bombs in quest mode (keys and smart bombs also carry over to the next tower here) and heal drinks+warp wings are cheap as well
Can't damage bosses with smart bomb potions - only block some of their shots
Can only use one accessory at a time
Demons can be lured to destroy objects and other enemies - useful once as an alternate method of getting to a switch in earth tower but you also need the fight ring from water tower?
Unlimited continues in quest mode (lose keys and bombs only)

-
Some control/interface issues (no short range attack speed stat - makes the manual melee attack not much more useful, if your key/bomb inventory is full then you can't move past a placed key/bomb and it can be blocking a path, no invincibility time after taking a hit, the automatic melee attack when running into enemies leaves you vulnerable to their attacks, can't strafe, text & voice hints pause gameplay for a bit, the game could've notified you when all switches have been hit on a floor in quest mode, moving between floors in quest mode is a bit slower, at 10+ speed the scrolling won't quite keep up with your movement)
Some trial & error (hitting a potion in melee with fight ring makes it not trigger, can pass in-between two diagonal stair tiles - lets you reach some optional items, some teleporter mazes - the way you can steer where to go in water tower and earth tower is really unintuitive at times - it's possible to get to the dragon anyway but you'll miss some items, trapped chests in quest mode means you have to shoot each one to be safe, finding hidden switches in quest mode means destroying a bunch of walls at random - gets tedious),
Some destructible health items and smart bomb potions (blue)
Limited credits in arcade mode (up to 9)
Even previously uncollected treasure disappears after having pressed all switches on a floor
Not enough shortcuts in quest mode leads to a lot of backtracking
No quest mode maps - some paths forward span multiple floors in a maze-like way in this mode and there are even some one way stairs and teleporters (simply marking the shortcut path stairs in a different color would've helped a bit)
Non-persistent floors in quest mode besides switch progress and turning off enemy+chest respawning if you hit all switches on a floor - should've saved opened doors
Unavoidable damage here and there (from demons for example, from damage tiles early on in quest mode)
Pretty repetitive (quest mode is a minor improvement but there's not enough enemy variety in either mode)
No difficulty options in quest mode
The shield is only for show - doesn't block attacks
Backtracking in quest mode (if you keep going upwards to the right in the fire tower you just end up at a dead end)
Pretty basic visuals with slightly worse contrast and detail than in the arcade game
No sfx when attacking in melee nor when hitting things in melee or ranged (accurate but feels unfinished)
The "confuse" and "slow" tiles are sometimes placed in a tedious way


Bugs:
-The final boss can glitch out and start shooting only to the side giving you a temporary safe spot

Notes:
-I somehow cleared floor 4 of earth tower without either the fight ring or the mirror ring (don't remember how exactly)
-Secret merchant: https://gamefaqs.gamespot.com/genesis/586204-gauntlet-iv/faqs/22206
​