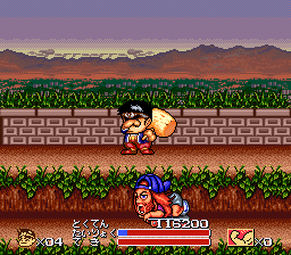 
​
+ Pretty good art direction (some color choices could be better, super deformed/cutesy style, expressive sprites), satisfying sfx and animations, smart bombs (special attacks - using them in mid-air is much more effective), can jump onto and off of ladders, difficulty (easy, normal, hard (many item containters are empty (no specials?), there are more enemies and bosses take more damage) and control options, armor and jump upgrades (vests and pants), pretty fast paced action with little to no slowdown, quake/ground stomp returns and throwing and shockwave moves were added (first one stuns most enemies, second one sends a shockwave in both directions), somewhat improved jump controls (some mid-air control though it's still pretty limited, controllable height, can turn around in mid-air), some projectiles can be blocked and some repelled back at the enemy, decent cutscenes in-between most levels (mainly portraits and dialogue text),

+/- Can only upgrade the hammer once (metal or 360 degree swing), can't attack below Harry in mid-air unless you're using the 360 degree swing hammer, larger lifebar than in the prequels, negative power ups (poison), can no longer block by ducking, no save or password (pretty short game though), short attack range (can't be increased but the throw and shockwave moves help), upgrades are lost after each beaten level, no level timer, unlimited continues?, the throw move is a bit overpowered

- Some delay before jumping, inconsistent hit detection at times (first boss is invincible while doing its dash attack, skater boss is invincible while countering after being hit), can't move backwards/left in a level, inconsistent controls in auto scrolling segments (can't jump or attack upwards or throw or use specials on the moped), can't move while crouching, pretty short (9 levels), repetitive death cry sfx which gets old after a while, no health item inventory, lacks the box/pipe/bag physics seen in the arcade original?, some trial & error (throwing controls (up, forward, attack), boss patterns, some of the green laser turrets), none of the sprites are as large as in the arcade original, throwing is a bit iffy in mid-air (could be my PS2 controller's d-pad though), so-so enemy variation towards the end,