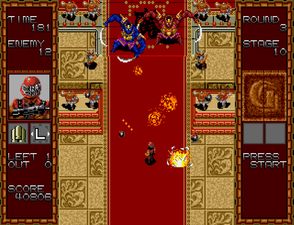 +
Lots of different characters to play as, some fun weapons, 2-player coop, interesting blend of strategy and action, good length, difficulty options (easy mode cuts out about 10 stages but is otherwise pretty much the same as normal), some good bosses, decent enemy variation, destructible walls (only in final level unfortunately)

-
No password/save, sloppy hit detection, the height difference thing gets tiresome pretty quick (lots of characters can't hit enemies on a different level), lots of poor characters (most are too specialized for any given situation, many are too slow to be any fun to play as), trial & error (ambushes, learning each character, final boss), starts out too slow and easy, slow paced, repetitive, uneven difficulty curve, missing sfx, the music doesn't use the entire sound chip (fm drums, no psg(?)), poor use of color (except for some bosses), if you kill all enemies in a stage while rescuing a character then said character dies - you need to first get to the exit with one character then use a second one to clear the screen, no boss music,