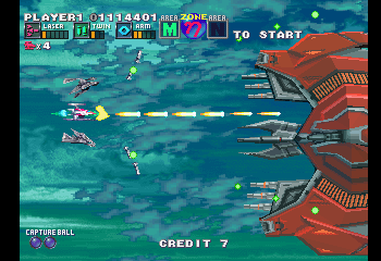 -
No speed adjustment (your ship is too slow to dodge some things without memorization)
Can't turn around manually (would've been useful at times)
Heavy trial & error (some surprise attacks, boss patterns, if you start using a charge attack right before a boss then it's wasted, hard to tell when a controlled ship will die)
Some slowdown
Very hard to survive if you lose your controlled enemy before a boss and the last two boss fights make you fight for rather long periods without one (between phases you generally get a chance to take over another enemy)
​Steep difficulty curve after the first two levels
Each path is kinda short (5 levels)
Overly long final boss fight for the highest/first path
Re-used backgrounds and enemies in several levels
No alternate weapons (though the beam changes when you're upgrading)
​The largest bosses seem to move at a lower framerate, lack of destructible obstacles? (some asteroids), no hidden items?, somewhat distracting backgrounds in a few instances