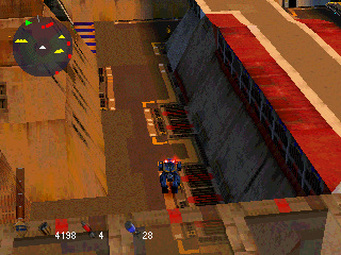 + Strafing and manual target selection (auto-targeting), 2-player co-op (split screen) and vs. (1 vs 1 battle arena (capture the base/tower defense)) modes, difficulty options, good radar feature (could've shown which direction the second player is in though), map feature (need to pause though which is bad in co-op), transform between walker or hover car, some cool weapons (mortar bomb, flamethrower), voice directions throughout missions (can't be repeated though), volume controls (sfx, music, voice), control options (can't be accessed in-game), choose weapon setup before each mission (need to finish missions to gain new ones to select from though), decent voice acting overall, some good bosses (sub marine, roof shuttle fight), fight alongside allies in some missions, save between levels (multiple slots), decent cutscenes after each level,

+/- Reload stations can't be used by both players and they're wasted when at full life, cheesy and shallow story, non-interactive control tutorial, increasingly labyrinthine levels as you get further into the game, no shop or upgrade systems, no analog support, first the elevators require switches to be pressed and then they don't, violence porn (automatic crowd control cam (zoomed in third person view) when encountering crowds of people), no overall time limit, fall damage, can't tilt the pause menu map to fully view the layout of the level in 3D, mech keeps jumping if you hold down the button (generally not a bad thing since there's no jump height control), limited ammo

- Clunky jump controls (short height and length, can't jump while in a slope, no height or length control) - at least there's a super jump code, some trial & error (need to fully save up on secondary weapons for the final boss or you won't have enough ammo to beat it, you'll start out getting fired at in missions 5 and 6, so-so directions near the end of mission 5 and at the middle of mission 7), shared HP in 2-player co-op (can't be turned off, can't kick out a second player while in-game), grainy visuals, only two camera angles are useful (would've been good to be able to hold a button to tilt the camera downwards a bit and see what you're targeting if it's airborne or far away), some annoying music tracks, some tedious timing puzzles (mission 3 gate switches), kind of repetitive (search and destroy, open locked doors with switches, avoid civilians (rescue missions are never more advanced than the player having to reach the people they needed to rescue)), no way to quickly turn around, some backtracking here and there (there's generally a new challenge provided while backtracking but also several narrow high ground parts where you have to redo segemtns if you fall down), inconsistent environment destructability (can blow up a weak tower but then not clean up the rubble or get through a thin fence somewhere else) - can get annoying due to labyrinthine layouts, slow and generally small elevators, overly large fourth area, some annoying sfx (repetitive screams), some poor voice acting (the cult in mission 3, most villains), no checkpoints (fairly long missions) except for in mission 7, frustrating platforming in missions 5 (roof tops) and 7 (conveyor belts), one hit death from simply touching the sixth boss (even from behind) and in the same level you can fall into "lava" and not be able to get up,