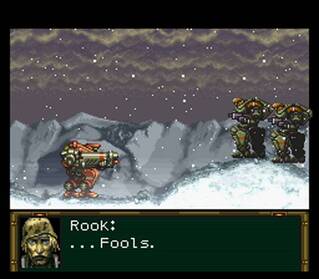 
​
​
+
Choose your own path between levels on a hub map
good customization options for your mech (and even the pilot)
exit the mech to reach tight areas (and to use grenades, similar to Blaster Master)
level maps (start menu)
fight in Scandinavia
hidden items, inventory (for healing items), plays a lot like the Assault Suits games (adds a shop, level up system, detailed story and hub world), good dialogue overall (tries a bit too hard to be badass at times which then again can be funny such as when the president rams an enemy mech), double jump and short flight (upgradeable), dash move (ASV), can jump down through platforms, nice visual effects, great art direction, allied cpu-controlled mechs (the AI kind of sucks but it's still cool, can't order them around or heal them (?)), alternate mechs to buy (different stats and abilities), decent variation (decent enemy variation, autoscrolling and underwater segments, chase, find and destroy, rescue, protect/hold out, key search, escape sequence), can block most projectiles with a shield (see Assault Suits Valken, similarly it doesn't work while in mid-air), save between missions (four slots), revisit beaten stages for equipment and reactions from NPCs, nice ending, good length (10+ hours), call for air strikes, decent arsenal of weapons (homing missiles, lasers, healing sphere, paralyse, gun drones, decoys, mines, floor seeker (see snake man)), some destructible scenery, nearly all enemies have health bars, you can review a mission objective in the pause menu, control config

+/-
You can gain plenty of levels by re-entering areas and clearing them out
no 2-player?
expensive equipment until the late game
having the right equipment can make some bosses much easier (Genoce in computer room)
allies' mechs cannot be repaired if destroyed (they can be repaired during usage, yellow mech can't be re-bought in the same area you got it)
no reload button for the main gun (guns have different properties, can upgrade reload speed, Vulcan Gun can slow game flow to a crawl when the action gets intense and you need to wait for it to reload), bosses respawn in areas which you can re-enter but which remain hostile (can't escape once engaged in a fight), make sure to check the shop before the finale for the last mech, fairly specialized allied characters, take damage from exploding enemies and objects,

-
Some trial & error (mechanics, bosses, sudden auto-scroll during minefield mission, shots from off screen, explosion escape sequence, 'my mech isn't made for this area', need missiles or a Vulcan Gun to proceed inside the Sentinel)
uneven difficulty and mission lengths (bosses vs. neutral areas, near impossible not to take damage during some parts (respawning enemies combined with having to shield yourself which also slows game flow)
mission objectives can be vague at times
having to go far back to buy equipment (some of it is unique to certain shops early on)
tedious parts (final boss, search for facility door in Germany, African cave with invincible flamethrowers, Galeon maze)
​double tap dash should've been set to a button and lasted a bit longer (length can be upgraded, you also need to jump to turn around while sliding (cancelling the slide)), plenty of dead space, annoying abbreviations for equipment, can't lock firing angle, slow movement in hub world (only to adjacent areas), some control quirks (can't duck, somewhat slow jumping, awkward way of exiting areas (hold down, then press B button when the mech is targeting downwards)), many areas early on are pretty much flat stretches of land with a few simple enemies in them, some backtracking (ID search in Germany, Galeon, level exits in your bases, out of the base in which you hack into a computer terminal), some annoying sound effects (Laser reload, low HP alarm), plot oddities/conveniences (can't interfere with Bishop killing civilians (or other similar scenes), lack of exposition on the Society, not a good idea to leave your mech before the bank was it?, scouting doesn't seem to be a highly regarded concept to your team), pretty obvious plot twists and bad guys, momentum is lost when landing from a jump (means you need to keep double tapping), can't view funds unless in a shop, 'use heavy duty explosives' = use Luven as an ally, mostly underdeveloped characters (more of a political story), pilot control problems (can only shoot sideways, on foot movement is very slow compared to later mechs (not upgradeable), Contra style jumps, can't run down slopes), easy to miss some dialogue spoken during missions (nothing crucial),