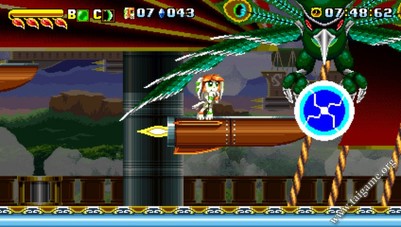 
​
​+ Mixes gameplay from several classic early to mid-90's games (Sonic, RKA, Gunstar Heroes, MMX4), great bosses overall, four different playable characters (one of them unlockable, one accessed with a cheat), fast paced overall, very good art direction overall, 2-3 different paths through each level, mini-bosses and main bosses interacting with the level before you face them, hidden items here and there, nice cutscenes on a visual level, satisfying sfx and enemy feedback overall, some neat new gimmicks (the platform that spins two times and gives you blue gems/crystals before breaking, the spiked floor chase in level 2, piano puzzle, police patrol, etc.), well animated for a low budget/indie game, cool set pieces overall, choose your own path through the airship level, widescreen, difficulty and control options, enemies generally won't hurt you if you simply touch them (helps the pacing),
​
+/- Ride on walls and ceilings with a motorbike as Carol/green girl (cool but OP compared to Lilac's abilites), can't use Lilac's boost straight up or down (doesn't seem like it would be OP to have it and it would make exploration a bit smoother so why not?), acceleration acts like normal when moving up slopes and you can keep running up long walls, Lilac can duck but not roll or slide along the terrain (feels a bit off with Sonic-style levels), lives are meaningless (start at the checkpoint after a game over), somewhat bland bonus rounds (a room with a dice in it that gives random power ups) - need to find the ying yang symbol in a level to get to it, no shield inventory, shields look like they disappear when boosting, frequent checkpoints (such as before bosses; the game doesn't show you when you reach one though), no hidden levels?, can't switch character between levels, some delay before Lilac's dive attack and boost moves, no saving before bosses (each level is pretty long, usually with three sub levels)

- Very short invincibility time and nothing that stuns enemies (combined with boss attacks that hit several times in a row), why not introduce the boost chargers earlier on?, can't cancel the boost move, unbalanced boost move for Lilac (too good vs. some bosses, slow recharching plus doing minor moves like the double jump also drains your energy so you'll end up waiting around repeatedly if you try exploring a level thoroughly (doesn't happen with Carol due to her wall jump) - should've not drained as much if you didn't hit an enemy (or the game could've let you save up on energy for later use like the tanks in Mega Man OR more gems could've meant faster recharging time but you would then lose gems by taking damage; shorter charge time would make it OP vs. bosses but they could've nerfed its destructive power), it was a bad idea to include character specific power ups in all playthroughs (like fuel cans in Lilac's playthrough or elemental orbs unless you use a cheat (!) to play as a hidden character (otherwise they are just like blue gems) - they should've made all power ups always have a different use depending on your character choice instead of sometimes making them non-interactive), inconsistent wall/ceiling physics (sometimes Lilac latches on and starts running when boosting into them; sometimes not), can't boost while pushing against a wall or boulder and the boost doesn't help push boulders, could've used a tutorial (playing as Lilac/blue girl the red platform boosters (?) can't be used and instead the first one in the sequence gives you a few blue gems which gives the impression that you approached it the wrong way), so-so chase sequence in level 1 (semi auto-pilot (probably since you can't see anything ahead of you) and there's a weird graphical glitch when the boulder appears and disappears), some trial & error (lava boss, figuring out what all the items do, some enemies' corpses hurt you, finding paths with Lilac's boost - would've been easier if the view was more zoomed out/zoomed out while boosting), some points of no return, can't turn off the in-game voices (characters frequently announce moves when performing them which gets old quickly), pretty dumb and cliché story, uneven voice acting quality, sometimes poorly paced story (a couple of 10+ minute segments), pointless but short animation when grabbing a ladder in mid-air at high speeds, Milla is underpowered vs. bosses, somewhat generic character designs overall, fairly long delay after using a double jump until you can boost even if you have enough energy (throws off your timing at the large dragon boss, can be shortened by performing the dive attack after double jumping though), some delay when looking up and more when looking down (not needed when there's no roll/spindash), need to be pressing in the opposite direction when running into a spring for it to work properly, some enemies/bosses take too many hits to kill considering their patterns (the bulldozer), somewhat uneven difficulty (first fight with snake man - if you jump and get caught in his line of fire you'll take tons of damage), minor hit detection inconsistensies when using the boost vs. breakable walls, no gameplay use for the star cards (collecting them just earns you an achievement and they're also usually easy to get), can't see bosses health bars, no volume control for sfx (so you can't mute the game while listening to something else), can't double/spin jump to open item containers from above (can usually punch them when standing on them but not on shield containers or crates), somewhat bland (but short) shoot 'em up level, occasionally choppy screen transitions, some tedious vertical platforming in the final area, somewhat generic sprite designs at times (the green and white PC's, some bosses have so-so shading/form and a semi-computer generated feel to them)