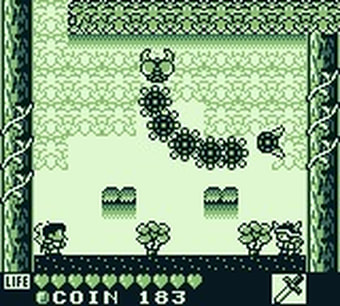 
​
+ Good writing overall, hybrid gameplay (top down action adventure overworld/maze platformer dungeons), some good humour (satirical, whimsical, slapstick, nerdy), non-random encounters, can choose to fight or bribe certain NPCs (latter leads to a fight anyway?), good map systems (like link's awakening except without the "fog of war" on the world map), great art direction overall, save anywhere (two slots), high jump (stiff though - jump straight up then get just a bit of mid-air control at the top), cling to and climb platform edges, scripted events make town exploration more exciting, three stat upgrade items (life, power, speed), if you enter a fight without the right tool/weapon you'll get the option of running away or using an item, some memorable characters (Mandola), transformations (frog - breathes underwater/eats bug enemies/jumps higher, snake - turns some enemies into blocks/crawls through tight spaces/can barely jump; each animal can talk to others of its kind), some shortcuts (wells), teleport back to the current dungeon's or last visited town's entrance (unlimited use warp door item), NPC encounters in dungeons, decent puzzles overall, travel by boat in the late game, fast text speed overall (some words are typed really slowly for dramatic/comedic effect), decent twist at the end,

+/- Linear structure, lighthearted tone, rich brown (arabic?) prince protagonist, pretty frequent health restoration points (crystal ball) and you get health drops from some enemies, kind of unusual premise (you're racing a rival prince to save a princess) but cliché story at its core, can only jump in sidescrolling segments, somewhat limited inventory, auto-talk to NPCs by moving into them (occasionally annoying when you want them to move out of the way), several fetch quests, die in one hit from spikes and lava, fun but very easy final boss (the only interactive battle sequence), some adult jokes

- Some grinding for money, some control/interface issues (you automatically put away an equipped tool after entering or exiting a building/cave, have to press the d-pad again after moving in and out of buildings, can't jump while standing in front of a ladder, no diagonal movement and stiff movement around wall/object edges, no item names in the inventory menu, somewhat slow menu transition), automatic battles (can only affect the outcome with gear and stats), some trial & error (making dr. ivan help you, can't escape from the dungeon guard in the palace, the fireball in lava traps, using the wine (health potion) at full health wastes it, sink and die quickly in water until you learn to swim - it is mentioned that you can't swim but not that you'll die from trying), some meaningsless dialogue choices (can't choose not to drink the obvious frog potion for example), you keep getting items from enemies that you already have a full stock of (slows down grinding a bit), mostly uninteractive environment in towns, some dead space and dead ends, some NPCs say the same thing or something useless and generic, can't post on the bulletin board without first talking to a random villager in Pudding town, drawn out and easy mine digging segment with crappy music, some plot oddities (can't save the frogs from being kidnapped in the late game - the guards just knock you out of the way, can't give joy fruits to NPCs (would transform frogs back into people)), no sfx when using pickaxes and it's a bit tedious how the game often places a bunch of breakable rocks in a row (breaks flow),