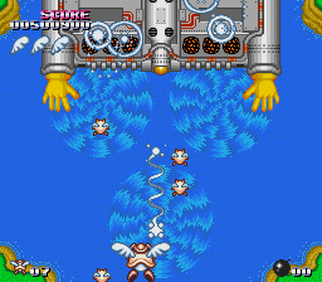 +/- Respawn on the spot until game over (you regain 3 bombs), more conventional weapon system than in Twinbee (Darius style - three upgrades per weapon and you need three cakes to upgrade one level), somewhat forgiving hit detection (ship hit box is smaller than its sprite), limited continues (only 3), no air to ground attacks, picking up the same weapon power up twice doesn't level up the weapon, weapon levels aren't linked (you can kep a level 3 weapon while losing levels for another one, then pick up that weapon as level 3 later), extra hidden options (start+select on controller 2 - lives and continues, stage select), only minor slowdown in a few spots,

- Some annoying sfx (some bosses when hit), uneven difficulty (bosses 2 and 3 are easier than the first one (unless you use the safe spot) and most bosses are pretty easy when near full upgrades), some trial & error (boss patterns and some surprise attacks), 1-player only?, no weapon inventory, the "shotgun" cloud weapon is kind of lacking until it reaches level 2 or 3, some overly long pauses in the action, safe spot vs the first boss (just stay in the bottom middle if you have a level 2 weapon), no control config,