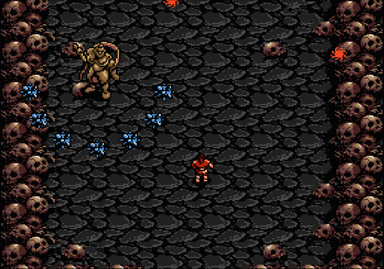 ​
​+ On foot vertical shooter (see Elemental Master) with jumping - can jump over enemies and shots, shop/weapon upgrade system (buy weapons with money (phoenix feathers) collected from the brown statues in a menu that you can bring up at any time), alternate paths through levels, map feature (F4 - shows the basic layout and gates of a level as well as your current location but not important items), can choose your to go back to the first level after the third level, you go back for the special item and all doors are opened), rate of fire and shot distance upgrades, temporary invincibility and time stopper power ups, smart bombs (trigger when touched though and won't hit the statue/turret enemies), some terrain differences (pools of water that slow down your movement), press F3 to show how many of each item you have (speed upgrade/shoes, compass - not sure, ladybird/ladybug (rate of fire and distance of shots), tebako/present box (keep upgrades after game over), brown scroll/map - disappear after use, white scroll/fast travel map part, square letter symbols/gate keys, special items/round letter symbols - needed to face the final boss), the phoenix statues give clues (get the fan translation) on how to proceed through the game, respawn almost on the spot with all upgrades intact (boss fights don't even restart fully) until using a continue (which takes you to a nearby checkpoint), password save (F1 then Home), pretty smooth scrolling, very little slowdown and flicker,

+/- Odd fast travel/hub map feature (shows how levels are connected and lets you move back to earlier levels and even two later ones but only if you're on the third level - if you go back to one of the first two levels you can't fast travel back to the level you were on again), unlimited continues (you'll lose all upgrades and money after using up your accessory items though (present/tebako box)), maze levels (each level consists of three parallel paths connected only on some screens, if you take the wrong path then the level path you're on keeps looping), movement speed upgrades, can't upgrade a weapon by buying it twice, need to touch phoenix statues to open gates and proceed, can't see your money count without bringing up the upgrade/shop menu and can't see your lives without pausing, no auto-fire without a cheat password, unusually dark premise (hero is a partially disabled thief who accidentally killed his wife due to a disease taking hold of him and now needs to fight his inner demons to redeem himself), hard to get to the special item/final boss key item in each level, no invincibility time after respawning, can't jump out of water

- Non-adjustable speed and the default is pretty slow, too hard to recover after losing all upgrades and money after a few levels, trial & error (some fast attacks from below or the sides - sometimes all sides, cheap deaths from taking the wrong path at the wrong moment - the game should've paused the scrolling and spawned your avatar a bit further down to avoid these situations), finding the correct path to the boss since the gate signs are in Japanese - get the fan translation, ), can't revert to a cheaper weapon without spending money (creates difficulty spikes at some points where you need to defend your sides or rear), some weapons aren't really worth it, can't control jump length nor height (also can't move after jumping straight up), difficulty spike at the final boss (very small hit box and some weapons kinda suck against it - the first and second weapons seem the most effective),


Comment:
I quite liked Firebird, it's similar to Elemental Master or Knightmare but with more fleshed out gameplay. Each level is made up of three partially connected, looping paths with locked gates that you need to find keys for to proceed. Some of these are actually in other levels though, see the entire game is actually connected and you can travel between levels at a certain point, even jump ahead to the last one. The game is also rather modern in how forgiving it is for a shoot 'em up with respawning on the spot, upgrades intact until your supply of a certain collectible (called tebako here) runs out, and unlimited continues.