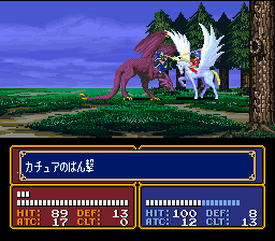 *Book 1 finale if you're unprepared
**Book 2


​
+ Visit houses and shops during battles (lore, tips), choose 1 of 4 weapons to use before each vs. attack, supply wagon (stash) - Marth drags it with him during battle, forts (provides more defense and heals the unit occupying it a little each turn), save at any point during battle (three slots), good battle animations (added backgrounds as well as different sprites for each weapon here, mostly small sprites though), some cool spells and skills (warp - Master of Monsters?, transform - one char mimics the look and stats of another (but not the equipment nor boosted stats)), two campaigns (first one is a remake of the first NES game), terrain effects on movement and damage, can recruit some characters on the enemy side during a battle by talking to them with the right character, class promotions (one level only, some chars have none though and some start out promoted), some innovative side objectives and events (the doors getting locked over time and your party split up for the final battle (as cheap as it is), holdout/rescue mission in chapter 10, stop thieves from leaving with treasure chest contents, capture forts to prevent enemy reinforcements, etc.), choose units/characters and equipment before each battle, character portraits during dialogue, pretty good interface for the time (army overview screen lets you quickly select which unit you want - Master of Monsters, animation/text/cursor speed options (can also turn off battle animations), can speed up text by holding down a button), unit movement range is now highlighted when selecting one, can check enemy unit stats at any point - Master of Monsters?), colosseums/arenas in some scenarios (can engage in gladiator fights with one char for gold and exp - one at a time only and it costs gold, the difficulty is very random here and the game auto-picks your char's weapon), a new music theme starts playing when you're about to win, decent intro cutscenes (artwork and text), can manually dismount your mount riding units here (can be done after moving or trading gear in any battle, forced for in-doors battles, lets them use swords), some hidden/secret shops (need a member card and usually a door key/thief (can't tell in advance which level it'll be on and there're no good visual or other clues)), encounter music (shop, colosseum, bosses/leaders, village houses), can choose to use as few as one unit for a battle for an added challenge, somewhat different ending depending on if Sheeda/Caeda died or not and you get to see what happens next for each surviving char (text boxes like in Langrisser - some chars have the exact same epilogue text though, the game seems to neglect that you could've saved the staff until the end though letting you revive Sheeda), archers are pretty good here (unlike in some later games?, javelins are pretty weak otoh), decent enemy AI (tends to attack your weaker chars with 2+ units, uses long range attack spells and healing, doesn't focus its whole army though and oftentimes some units will just sit there and wait for a whole battle, easy to lure into chokepoints), added notification when a wounded char regains HP inside a fort here, adds a narrative introduction to each battle and death dialogue for each char, Armor Knights can be promoted to Generals and Hunters can be promoted to Horsemen here,
Book/Campaign 2 (War of Heroes): Dancer class (their dance skill lets one character move again in the same turn), more detailed story and dialogue (more lore as well but the characters and main plot aren't really better written), added Talk command, star shards (these affect the growth of certain stats), resire spell (steals HP), some new backgrounds

+/- Linear structure (no dialogue choices, at one point you can choose between two recruits who come from rival villages but neither of them are among the best, other optional recruits along the way), perma-death (can revive a single character before the final battle but you won't know about it until the second to last one), weapon/staff deterioration and level requirements (a late game item can repair weapons (not staffs) but it can only be used by two chars and only 6 times, the level requirements aren't much of a problem, fighting in the colosseum/coliseum won't damage your weapons/spellbooks so with patience you can easily take advantage of them), can't split restorative items with more than one use left up in several parts, only one save slot per game, strength stat affects magic attacks and healing, very long intro story told with text only (in-between battles story is also text only), the max army size increases slowly over the course of the game but caps at 15, can't use mounts during indoors battles (the castles are big enough for them to fit), a char can't cast magic shield on themselves with a staff, can't tell a character to attack only once (to soften up an enemy for a low level char), sometimes the enemy AI gangs up on one unit and sometimes it spreads its damage out a lot, can't check an enemy catapult's range, somewhat random wager amount at the coliseum, level differences generally matter a lot, some OP characters (Linda, Sheeda, Renna?, Oguma?), level requirements for certain weapons (not that well balanced), some maps have respawning enemies (makes grinding easier though they don't keep coming forever), can move+trade or equip a weapon+attack in one turn, no armor besides a few special items, doesn't have the rock-paper-scissors style relationship between spells and melee attacks introduced in later games (certain weapons are good against certain units though such as dragon killer/wyrmslayer swords vs dragons), no area of effect spells, trade chaining lets you use for example a warp spell twice in one turn with a single staff, both campaigns feature some child soldiers, archers can't attack at all in melee (means they can be pinned down), can't move all the way to the edge of a map,
area of effect support bonuses specific to certain character pairs (accuracy, avoid and critical chance, trial & error as there's no in-game indication of it at all)?,
Book 2: No axe user chars, need to collect all star shards (some are taken by thieves), random chance of finding hidden treasure in some castles (at the seize point - scenario 2 for example),

- No manual deployment, overly random battle results (very strong criticals and you can get doubles - the latter can at least be calculated but you need some advanced knowledge of the mechanics, sometimes you'll dodge several attacks in a row and sometimes none) - leads to having to play it safe more often than not and to some grinding (new chars also generally start out at a low level), promotion items are too rare and each one is specific to certain classes (universal items would've been better as you could've had more flexibility in which classes to use without some chars becoming weaker in the late game), no "restart scenario" option, control/interface issues (can't see a unit's base stats without selecting it (as in Shining Force, annoying when selecting someone to cast a healing spell on), no memory cursor (see FF), can't see a unit's items without picking it on the army selection screen, can't zoom out to view the entire battlefield, abbreviated stats and gear names, can't see what a broken weapon used to be, can't shop or use the coliseum quicker in-between battles - moving a unit at a time as if you were in a battle to these facilities gets old after a while, can't speed up or skip individual animations, somewhat slow and clunky shop menus and some slow movement animations (can't turn off movement animations and for some reason low level chars move slower), can't buy more than one of something at once, menus don't wrap around, you can restart a scenario by resetting the game and reloading but not by picking restart from a menu, can't use stat boosting items in-between battles, the game doesn't make it clear enough when you've picked up a special item or weapon, can't use a healing item on an adjacent unit - need to trade then use (a mage char also can't use a staff item on themselves), saving during a battle always takes you back to the main menu, somewhat stiff/slow/unresponsive cursor even on fast speed, some text can't be sped up?, can't move the cursor over tiles a unit can't walk to while choosing where to move, somewhat slow HP refill animation for units in forts), some trial & error (your army is split up at the beginning of the final battle and you need several keys or a thief to reunite, if you didn't get the star & light orbs in chapter 15 the game becomes much harder a few scenarios later, can't see in advance where and how your army will be deployed, Garnef is invincible in chapter 12, some village/large buildings have characters in them while others have nothing and the game doesn't make it clear that you can only visit them as Marth/the main char, some surprise reinforcements, the game doesn't tell you how to recruit potential allies on the enemy side and sometimes you'll kill one in one hit before they make themselves known (sometimes you need to have a certain char in your army which you might not have selected before starting the scenario as well), the game doesn't tell you that julian and rena are controllable in the beginning of the third scenario (they seem to be neutral NPCs at first), sometimes generic looking sprites, some units take longer to level up, you don't gain any gold until the end of the third scenario despite encountering shops in each battle, some weak characters (wolf/villuck, george, maria?, saji, maji, ricardo, ellis, alan, roshe?, zaggaro?, caezer/caesar?, samson?, boa?, mishelan?, ), no class customization, a bit repetitive, overly random difficulty in the coliseums and you can't check who your opponent will be beforehand (you can sort of tell by the wager amount if it will be easier or harder though), campaign/book 1 removes some content from the original (5 scenarios and the 6 chars appearing in them (Wrys, Darros, Roger, Jake, Beck, Gotoh), no classes wield two weapon types here besides mages with staffs & tomes/spellbooks), sometimes uneven difficulty (sudden difficulty spike at the final battle (the game seems to expect you to haved focused on ~10 chars though it is still doable with the right setup, chapter 17 is easy after getting to the man who gives you the starlight spell, sometimes too easy to grind without any danger), few battle themes, mostly cliché story with simplistic characters, a low level archer can't even enter mountain terrain (meaning you can't get to the other side of the map in the first Book 2 battle), tedious travel distances in a couple scenarios,
Book 2: Trial & error (apparently you're not supposed to beat the enemy forces in scenario 7 - only seize the castle), harder to level most of your chars even early on and there's no vulnerary shop until scenario 5 (the level scaling is also a bit unbalanced - for example a lvl 2 mage won't level up from killing a dragon knight, can use a colosseum in scenarios 3 and 5 but that's a gamble and even if you do grind a bit at those you'll end up underleveled by scenario 7), Can't see what the star shards do in-game, can't have the story pick up where it left off in your previous save file for Book 1 (Sheeda and Lawrence won't stay dead for example, several chars are also at a lower level and/or class in Book 2), sometimes uneven difficulty (tough second scenario - the wyverns, ), tedious travel distances in a couple scenarios,
some weak chars (machis, alan (only starts out good), samto, ; mediocre: luke, warren (low speed growth in particular), mallesia?, ricardo (good starting weapon though), george (good base stats and starting bow but low growth), )

​
Notes:
-Fire Emblem 3 (story-wise it's the direct sequel to FE1 though)
-A couple of lines aren't translated and there are some errors (the Book 2 intro says 5 years passed since Book 1 then the first briefing text says 1 year, various typos)