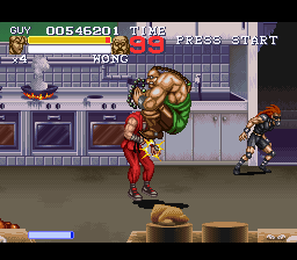 +/- Double tap run move (could've been mapped to X or a shoulder button), more cartoony than for example SoR (Haggar gets a pony tail), weapons tend to vanish when dropped, short range/small aoe and a bit of a delay on the running attack (Guy), limited continues (5 on Normal), special attack doesn't override all enemy attacks (such as being grabbed and lifted up by bigger enemies), some moves and enemies seem borrowed from SoR 2 and Tutles in Time, harder to pull off Lucia's super move, off the wall jump kick not more effective than a regular one? (you barely get to used it anyway)

- Can't move/dodge/jump vertically/sideways (some bosses can jump attack like this), slowdown, some waiting for enemies to move on screen, pointless delay when pausing while a cheesy jingle plays, mostly forgettable art direction, no 'no friendly damage' mode (CPU controlled player sometimes hits you and often gets in the way), missing sfx for some actions (jumping, picking up food, etc.), weak or muffled sounds overall, repetitive (lack of level hazards or pits, mostly non-interactive environments), weapons are dropped when moving between sub stages, CPU ally can't use continues, worse title screen in the western versions, a black enemy was turned white for the western versions, character specific moves and weapon proficiencies aren't shown in the game, some trial & error (learning which moves override others, boss patterns, some fast attacks from off screen), one annoying music track (the hip hop inspired one), weapons are too rare, some enemies appear in unfitting areas at times (german soldier, baseball player),

Notes:
Guy is best with the nunchaku, Haggar excels with the pipe, Lucia is good with the club and the weapon of choice for Dean is the hammer
Moves: http://rq87.flyingomelette.com/FF/F/3/chars.html