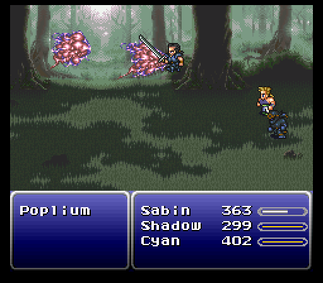 
​
​
+
Somewhat improved interface (equipment description in shops as well as an arrow indicating if an item boosts or nerfs your characters, l/r function in menus)
impressive use of colour
some nice visual effects
more interactive battles (timing and combo based special attacks)
good dialogue overall with some decent humour
some innovative gameplay (moogle split party rescue, raft ride, cult of Kefka dungeon, stealth sequence (non-random encounters), the opera scene, choosing your own path during some segments (get to see the story from each character's different viewpoint)), ride chocobos (now rentable) and airships, some new abilites/spells (seal sword, re-raise, invisibility, deathblow/blitz, slot), plenty of new summons to find, Esper system allows for pretty good character customization, some memorable characters (Orthros, Shadow, Kefka, Cayene), nice character introductions, mostly well made personal scenes to flesh out the characters, introduces ultima weapons, searching for and reuniting with everyone in a post apocalyptic world, teleport out of dungeons, battle arena (automatic and the bidden item gets traded in when you win, AI is pretty random), auction house (need to bid on the current item to make the next one come up), some decent puzzles (crater dungeon, dream sequence, Zozo clock), optional bosses and characters, fairly open ended late game (you can tackle the final dungeon almost right away or go find all characters/items), nice ending (somewhat different depending on which characters you reunited with), pincer attacks, pretty impressive music

+/-
Running outside battle requires an accessory
some Jobs from FF5 incorporated into accessories
fairly specialized characters
unintentionally hilarious voices in some music pieces
tents are more expensive than before
many segments where you need to split the party in two or three groups, only one summon each per battle?, features bestiality, need to grind to afford all equipment/spells in a new town, borrows plenty of elements from FF4 and FF5 (spells, abilities, dungeon designs, equipment), Asper spell almost removes the need for Ethers, no submarines, most status spells are less effective than in FF5, some removed/missing spells from FF5 (reset, magnet, dynamo, combine), still can't change any other equipment than weapon/shield during battle, beaten characters stay dead after battle, save points (save anywhere on world map), confused allies act before your own command inputs if their bar fills up before the animation happens

-
Spells cast on jumping or dying characters are wasted
frequent random encounters (a late game item lowers the rate a bit)
Gau's and Mog's abilites not explained in-game
the silliness and carefree attitude of some characters gets tiring in some scenes
mostly cliché story (magic vs. technology, history repeats... etc.)
​can't choose who to target with Mash's deathblow/blitz or Cayene's sword skill (there's also no indicator of a successful combo until you press and see the animation), while there's a shared inventory in split party segments you can't access other characters accessories to remove them (there's a guy who does it for you, but only on the airship), uneven difficulty (storm dragon hidden in a chest in Cayene's hideout cave, can't buy potions before Kefka's attack on Narshe (can be hard to reach the menu to heal here as well)), plot oddities and lame devices (what happened to the cultists after beating master of magic on top of the tower?, where's the threat that makes the empire actually need more power? - they pretty much rule the world from the beginning, where did the second wave of imperial forces come from (airship fight)?, can't resist vs. Kefka in the Esper tube room (also later before the magic continent), Cid is ludicrously naive, a rebel group can buy equipment in a town occupied by the empire, the scene transitions after Linn's transformation and after opening the Phantom gate ('OK well, whatever, let's go back!'), 'surely there must be something useful in it' - old man in Narshe about his own locked chest, Locke left the love of his life in the hands of a creepy old necromancer?, why's Edgar suddenly in Zozo after getting the Espers and why are you leaving Linn behind?), world map view is too zoomed in (the overview is even worse when riding chocobos and it's unchangeable), can't remove attached summons?, poor animation overall, only one beast/esper per character, some trial & error (some spells can't be reflected, Magic Master's ultima attack (can only be avoided by jumping?), cult of Kefka dungeon (no saving), death gaze, some falling traps are invisible, soul sabers (need counter attack?), some bosses and enemies attack several times per turn (requires planning via trial & error or playing very defensively), rescuing the kid in the ruined world), somewhat rushed/awkward scene with Cid after the world is ruined ('everyone's dead or missing, let's go fish! Oh, I'm dying too' - 'more fish! It didn't help!?' - Then Cid's letter reveals that there really are others out there, you also don't get to know much about Cid compared to the previous two games), minor interface quirks (can't see full equipment stats when shopping, no l/r in battle menus, can't sort spells or accessories/relics, NPCs don't get out of the way like in FF5), the ruined world isn't very ruined (the world map is quite deformed so it's still fun to explore), Setzer's Slot doesn't always work despite your timing being right, some backtracking (Yeti in Narshe, world map locations, cult of Kefka tower), some near useless spells/items/abilities, enemies sometimes try to cast spells without having enough MP or use boosting spells on the party, some underdeveloped characters (Shadow, Strago, Relm, Mog, Umaru), can't cancel rage/dance making their use very limited, some grinding required for all characters to learn important spells (need to attach a specific summon, of which there's only one in some cases, and go through a number of battles with it)