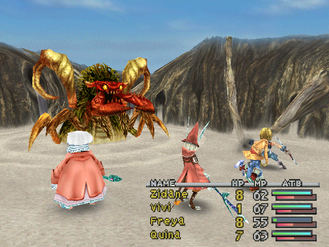 ​
+
Four character party
'Here' icon is back (but not exit signs, makes areas like Lindblum harder to navigate)
formations are back
improved dramaturgy (more movement during dialogue, better camera work, better timing)
characters models blend better with most of the backgrounds
co-op multiplayer option in battle, select button brings up help menu on everything in the menu, good interface overall (still good to have a guide ready to get an overview of spells, items etc), synthesize old equipment into new stuff, improved dialogue (more natural, humourous, good flow, less melodrama), chests are back and a pop-up icon (!/?) lets you know if you can explore a part of the environment, interesting story telling approaches - active time events (see what allied characters not in the party are doing, unfortunately these become fewer later on) and Moogle letters, plenty of hidden items (lack of visual or other clues for many of them though), unusual tricks (tents on enemies, accumulative ability growth when equipping two gear parts with the same ability, reflect on yourself + spell on yourself = 4x damage to enemy, make money through synthesizing, Regen + long summons = full healing), dress up as a guard, some good puzzles in dungeons, some non-random avoidable encounters (Garnet's rescue), easier to catch chocobos, target all in battle with L1/R1, memorable locations (Conde Petie, Cleyra, Lindblum, Burmecia, Reno) and characters (Quina, Steiner, Brahne, various Moogles, ), friendly monsters (trade items for AP and other items), title cards introducing new areas (see Monster World III, Link's Awakening), plenty of mini-games/action sequences (pop quiz, hot & cold, racing, rope jumping etc), Moogle letter sequence (can be counter-intuitive to follow at times though and mostly they just recap what you've experienced in a shallow/cutesy way), three optional bosses providing extra challenge (Tantarian, Hades, Ozmania), Alexandria castle transformation, one on one arena (renews a few times during the game, only one monster at a time, surprise rewards),

+/-
Specialized characters (standard RPG classes, in some cases bad as you'll want to have Scan (for example) early and for everyone) - some with unique equipment
can't boost rare item steal rate beyond 32/256 chance
no stealing outside battle (isn't it about time for that? Looting peoples belongings isn't the same thing)
Moogle letters are written like they're being spoken
can't switch Abilites during battle (might've made the game too easy, then again tactics are found through trial & error sometimes leading to save/reload)
can't use tents on world map (but can use them in battle and in odd situations like the Cleyra invasion scene), summons (Eidolons) are spoiled before the game mentions them (shown in menu during battle), trance doesn't speed up the affected character's battle gauge?, no 'teleport/backtrack out of dungeon' skill/item (these might not gel with the story if done wrong), how you end the 'hero's story' in Ramu's test has no effect on the game's story or Garnet's development, mostly linear structure until the end game (you can take some detours for faster AP or items, chocographs aren't discovered in an order where one can always get to them), can't move during dialogue (see Chrono Trigger), Soft and Curative spells/items are way too good against Stone and Undead enemies respectively, Soul Blade overpowered in Memoria (Petrify), no pincer attacks (the game clearly shows them before some battles start), in the shrine fights you only get to conrol Zidane/Quina and fight one of the guardians, can't block Virus/Trouble/Zombie

-
​Slower paced battles
slow transitions between screens
can't save Trance (limit breaks) for later use
having to stick to an old weapon to learn abilites from it (forces grinding)
enemies sometimes attack twice in a row
​tutorials are somewhat worse than in FFVII (no in-game examples, just plain text), loading breaks also occur after battles, some useless abilites (flee-gil, protect girls) or just lame ones (add status - shouldn't the weapon do this without an extra ability like in previous games?), more cliché/predictable characters (with some exceptions like Quina (HBTQ) and story, Beatrix and Freya (mostly independent, non-passive females), ability descriptions are sometimes too vague (Spirit stat's effects, 'this does lethal damage against a Beast' - how much and what are Beasts?, Six Dragons), limited card inventory (100), card game is more complicated and random (combo rule, you need to wait for a proper explanation, opponent cards are backside up...), cards aren't useful in the main game (see FF8), some mini-games are worse (tetra master, chocobo hot & cold (takes too long considering the rewards, especially the point based rewards (also why even have Ore and such there when you can get them so much quicker?)), frog catching), accumulate AP doesn't work for some 100+ point abilities, morphing/eating (to learn Blue Magic for Quina) is tedious business and some spells suck, some underdeveloped/one dimensional characters (Quina, Adamant), can't switch equipment with characters not in party (while realistic it can lead to being stuck with the same equipment for longer than planned and having unbalanced characters), Scan spell can miss its target (pointless time waster), some missables (Cleyra, some items used for synthesis later on, some minor sidequests, Excalibur 2), trial & error (Eidolon add-ons, finding the optional bosses, final Stellazio coin, using Carbuncle against Kuja=death, getting the foaming water treasure at Quan's dwelling (need to enter it, move to the balcony, then use a Pepper), having the right defensive and offensive support abilites can mean a lot, saving the inhabitants of Cleyra during its invasion - yields minor rewards, Eiko's meal - doesn't affect much though, battle plans during Kuja's attack on Alexandria), getting overpowered just from exploring the game in its entirety leads to dissonance between gameplay and narrative (example: when the Tarantula underground ride takes you all the way to Lindblum (you were going to Treno) because you're being chased by a second snake boss even though the first was really easy to beat), unskippable cutscenes (pretty much all of them are great though), random encounters (sometimes very frequent, sometimes far apart), some dead space (running up and down stairs), some annoying sfx (menus, chocobo digging on WM, card battle), pretty drawn out and poorly written story around the Lifa Tree/Madain Sara events, chocograph treasure hunting can get really tedious without a map marking out beaches and tracks, no encounter reducing abilites, some interface issues (no alhpabetical sorting of items, no quick way of checking gear abilities and what they do when in the equip menu or in shops, can't make characters remember commands from a previous battle or setup macros (see PSIV)), very easy puzzles in Kuja's desert hideout, finishing the mognet central problem isn't really worth it, curative spells/items can be wasted if the target character dies before use (from unexpected enemy attacks)

Plot oddities/conveniences - Steiner and his guards stupidity during the kidnapping, why does Steiner etc. throw a fit over the Waltz destroying robots/clones pre-Lindblum?, it took time to open a small door in Dragon's Gate? (where's the messenger telling Cid that it's open?), some of the South gate scenes with Garnet/Steiner (timed dialogue option, how did they get to South Gate in the first place?, stilted scene between repair workers)
end of D1 - how'd the rest of the party get to the battle?, why does Beatrix let you surive? 'This boy could become a problem... Well, see ya! - Kuja
Quale keeping quiet about Vivi's caretaker
Dagger says Steiner doesn't know Burmecia was attacked on the train with Marcus - but how would he not know?
the 'busy' mayor in Dali village
Marcus saves Blank (Evil Forest) and returns to help the party (Alexandria) in thirty minutes
Beatrix steals the gem in Cleyra right in front of the party's eyes
Brahne letting Beatrix hold on to the gem from Cleyra after she started doubting her motives (so she should revive Garnet) and not using her best forces to take care of the situation during the rescue scene
Leon choosing the worst time possible to defend the black mage's humanity (after Lindblum's been invaded)
Some ATE's where you aren't following friendly characters
Why don't the party ask Eiko about Kuja/The silver dragon before wanting to break the seal to the Lifa Tree?
Exposition from the Lifa Tree boss for no good reason
Eiko leaving her precious gem behind and Quina leaving Madain Sari for no reason? (The hostage scene is also dumb since there's protection against sleep and the 'sleeping weed' lasts for less than a minute)
Leon lets Amarant join the party for no good reason and you can even kick Garnet out after them having a moment together (lol!)
No explanation from Eiko about her background before Kuja's attack on Alexandria
Cid could build an airship in Oglop form before, so why not after Alexandria's been destroyed?
No explanation from Quina on where s/he's been when you reunite in Lindblum
Party gets trapped by Kuja at his palace in a really dumb way (you also end up using tons of magic/magic items for his fetch quest so really there was no need for him to use you)
Villains talking out loud when alone (and often bursting out in evil laughter) to explain the story to the player
No comments from the party if trying to access Ipsen's castle before you're supposed to
No good reason for the party not being able to battle Kuja at mount Gulug (All seven could've went, Freya could've jumped down to the Jesters, they could've escaped from the Jester boss etc.)
Garland had no reason to use Kuja or Zidane instead of doing the work himself?
Some plot points are not affected by early exploring (Quina keeps obsessing about food after the event in Quan's dwelling, Moogles keep acting as if the Mognet central is hidden after you've found it)

Gets seriously contrived at the end (mixing in clones and villains who make little impact on the story but are made up to be extremely powerful)
Drags a bit in the late game (unfocused storyline)
Kuja isn't very interesting and looks like a belly dancer
Bad plot twist near the end (a crystal hardly mentioned before is the source of life?, then the real final boss turns out to be a character you never knew about in beforehand who also looks like Sephiroth's first form in FF7)

​
Blood Sword bug when in Trance: If attacking with the Blood Sword, Steiner will only get the normal 50% damage increase bonus instead of the 3x bonus.
Thunder Slash (Steiner) bug: Often misses (fixed in later PAL release)
Bug in the Chocograph system?: One can get the six chocograph pieces for Mist Ocean before finding all the treasure up until before getting a flying Chocobo