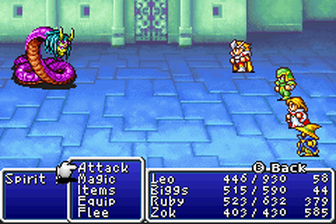 +/-
The game is easier overall (based on the Origins (PS1) version; phoenix down, ether, hi-potion, cheaper items, faster leveling etc. - some tougher bosses and nerfed treasure though) and there's no 'original difficulty' mode
can't buy spells to memorize later
can't run in the overworld
can't rest in-doors (except for at inns)
a couple of new references to later games
save anywhere (removes a lot of tension from the game), Thief went from under- to overpowered,  many fetch quests, has a very colorful and cutesy look to it (the original was a bit darker), tile-based movement (stiff around walls), can't spread out multiple hit attacks among different enemies (means you need to think about how to attack efficiently but also hinders some tactical flexibility), stackable stat boosting spells (Temper - rebalanced in a mod), can't talk to NPCs (silent protagonist, would've been useful to ask Unne about the Lufenians for example), only the white mage is female?, straightforward and mostly lighthearted story with shallow characters and scenarios, unlimited inventory space, separate music for when you're in the menu, can't cast stat boosting spells outside of battle (could've been time limited - see D&D games, leads to some early spells not getting much use), different use for haste/slow compared to later games (affects no. of attacks), being defeated in one of the bonus dungeons sends you back to its entrance (on the other hand this is the only way to exit them unless you beat the bosses at the end, you get to keep any collected experience and loot though), sky palace no longer has a high tech look, difficulty of the suggested next dungeon doesn't increase if you take a different path (for example going to the ice cavern before Mt. Gulg)?,

-
Very frequent random encounters which can't be avoided (slows the pace considerably and causes repetition)
no difficulty options (there are mods though; one for balance and one making the game harder)
thieves can't steal
curative items/spells about to be used after all enemies are dead in a battle are skipped
can't determine who will strike first in a turn? (the game doesn’t show how the turn will play out beforehand – see FF10, ​character order doesn't matter?)
​need to check the manual for some info (stats), can't teleport out of dungeons or back to a visited town (leads to a lot of backtracking (when you want to use the mystic key, going back to buy golden needles since there's no shop in Melmond, etc.)) - Exit spell is acquired pretty late and requires promotion to wizard, no ethers early on?, mostly poor sprite animation, no journal or notebook feature (for writing down/saving collected info from NPCs for later), numerous NPCs still share dialogue with one another, characters are blank slates (no party banter, no development, no personal back stories), commands can't be stored until the next battle (memory feature only saves the last turn's input), sometimes no indicator of an enemy or ally being affected when using spells (slow, fear; temper, elemental protection), some trial & error (some status effects stay after battle while others don't), a cure or boost spell is wasted if the target ally dies before the spell is cast, can't check a piece of equipment's stats in a shop unless you can afford it, plot oddities (guy in crescent lake doesn't comment on you having the levi-stone, where did the light warriors come from?, Astos (evil elf king) acts as if you've already met him if you went to the marsh cave for the crown before his keep, quest related dialogue from NPCs tends to not get updated), no dungeon maps, monks end up not being very useful, grinding for money leads to an overpowered party (you can skip equipment/spells and backtrack to get them later but where's the fun in that?), some redundant gear/spells (teleport, paralyse), some abbreviated spell and stat names, number of attacks and magic defense aren't shown in the character status screen (added in a mod), palette swapped enemies, new magic point system overpowers mages, lacking gear descriptions (stat changes), some dead space (dead ends, empty rooms), mostly simplistic and repetitive dungeon designs, re-used enemies in different areas makes each area feel less distinct, less gear for non-knights in towns, no alternate solution to stuff like the gem-eating giant (makes it feel like opening a locked door instead of it being an interesting encounter), limited store inventories (need to memorize where some items are sold), bestiary doesn't show spell/weapon type affinities, no clues on the airship location?, no defend or wait commands, menu browsing via l/r doesn’t work when casting spells, unintuitive town exits (easy to exit by accident in some towns), can't repurchase a sold item unless the store you're at already has it in stock


Bugs:
-The Mute spell was confirmed to paralyze instead of silence characters when enemies succeeded in affecting them
-A bug with Intellect was determined in which equipment was able to increase Int over 255, overflowing its byte.