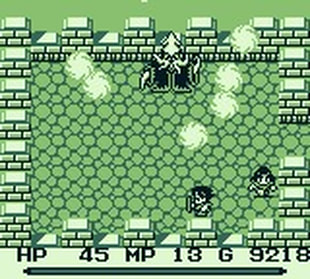 ​
​
+
Unusual premise (you start off as a gladiator for the main bad guy who manages to escape after a colleague dies and by his last wish goes looking for a gemma knight)
Semi-interactive intro (gladiator fight)
Two different attacks with the main weapon (stab (push forward) or swing)
Stamina/charge meter which is better balanced than in SoM/SD2 (less of a gap between its lowest and highest point)
Save feature (2 slots, shows current stats but not location)
Basic world map feature (similar to Zelda 1 except it shows towns) and decent dungeon map feature
Choose which of four stats to grow on level up (power/wisdom/stamina/will, before SD2 and didn't return until SD3)
CPU controlled ally (one at a time, first one/girl can be asked to heal your wounds, watts can be asked for shopping, chocobo can give a ride during which you can't be hit and later on you can travel on water, amanda can heal petrify, marcie can restore your MP)
Pretty fast leveling
Alternate main weapons which also let you get past some obstacles (axes - no alternate standard attack but cuts through trees, sickle - spin attack and cuts through some plants, chain whip - long range and can be used similarly to the hookshot in zelda to cross some pits and water)
Can map consumables or spells to the b button for quick use, teleport out of dungeons after beating the boss, minor dungeon puzzles (switches, ice tiles that move you in one direction, hit walls for a sound clue letting you know if it's breakable - always the middle of a wall like in Zelda 1 so it doesn't get overwhelming in terms of trial & error) and one decent quest puzzle (finding the medusa cave entrance - however the bag of fangs part is just trial & error), breakable walls and other obstacles, some good bosses, some cool spells (homing fireball, manually controllable ice projectile which turns enemies into snowmen - can then be used as weights in switch puzzles), some decent in-game cutscenes, pretty good art direction, death of two party members via sacrifice (you barely got to know either though and the scene with lester after amanda's death is pretty rushed), uses outdoor areas within dungeons (Zelda 2), very little grinding required, pretty cool final boss fight (reunite with the girl for the third and final form), can push weaker enemies after leveling up more

+/-
Save anywhere (if you save during a boss fight it restarts when loading though)
Four-way movement
General use keys (see Zelda 1)
Enemy respawning (move 2-4 screens away)
Can't move while attacking
Learn spells from allies while resting, npc allies tend to leave the party suddenly (they don't carry any gear or items though)
Can exit boss battles (they'll reset)
Borrows pretty heavily from Zelda 1 & 3
Mostly linear structure (with a bit of exploration in each area and maze dungeons) - once you get the cyborg chocobo which can cross water things open up a bit but there's not that much left to do by then
Watts stops selling his other items after getting the silver and going back to the dwarf cave
It takes too long to fully charge your attack meter early on (allows for new attack moves; leveling Will helps but you're better off leveling the other stats) - gets better from the mid-game onwards, no scrolling, no run move however you'll move faster while riding the chocobo and can't be hit, can't take control of any of the allies, auto-talk to NPCs by moving into them, can hit but not damage NPCs, the CPU ally can't be attacked, you should've been able to use the cpu ally or a non-frozen enemy as weight in medusa's dungeon (they could've made this bit make more sense if the ally said you needed more weight or something), can't push snowmen/frozen enemies into other rooms, too easy to rack up money after the first hour or so (also weird how rubies are worth much less than gold despite being found later on) - however you'll waste it on the flame gear later on (which is actually pointless besides the weapon since you'll soon get the ice gear), many enemies have hard vulnerabilities and immunities, mixes fantasy and sci fi, can sequence break past some dialogue with the cyborg chocobo if you want, temporary stat increasing items,

-
​So-so ally pathfinding and behavior (at least they can't hinder your progress here unlike in SoM/SD2 as there is no scrolling)
some tedious elements (NPC auto-talking when moving up to them+slow text speed+them sometimes getting in the way in narrow paths, amanda can kill enemies you've frozen/turned into snowmen to use as a weight for a puzzle in that dungeon), mattock durability, having to buy a bunch of keys)
Some interface/control issues (can't see staircases or floor info on dungeon maps, movement is a bit stiff around walls (your avatar doesn't automatically change direction to get past corners), can't choose not to pick up a chest item and chests can sometimes block your path if you have a full inventory, dungeon maps reset after exiting them - broken walls (using mattocks) are also rebuilt and unlocked doors relocked after moving a few screens away, have to select keys from a menu to use them on locked doors (at least you can use each key a few times after equipping one), items don't stack in the inventory (not even mattocks) - at least pure and cure items can be used 2-3 times each, can only buy/sell one of each item at a time, can't compare gear stats in shop menus, somewhat slow text speed, the game closes the menu when exiting a sub menu instead of going back to the main menu)
No quest log/journal (would've been useful in the room after the mantis where you need to equip the rusty sword for example)
Mostly uninteractive environment
Some typos and lack of "the" in some dialogue
The girl is a bit OP
Some enemies aren't knocked back or stunned when hit
Plain text backstory intro
Pretty one note characters
A bit silly how you run into the main bad guys right after escaping
​Some trial & error (it's possible to get stuck for a long time in dark lord's castle if you don't have enough keys or missed the morning star and ran out of mattocks (you can also get permanently stuck in the coastal area before the bone key dungeon if you never got the morning star), can't go below certain bridges with the cyborg chocobo, fairly easy to miss the morning star in the golem dungeon as the first row of rooms loop horizontally (the morning star has the same effect as a mattock on breakable walls and the golem and you need 5+ sets of mattocks to beat it otherwise) - need to backtrack pretty far to get it later on in the game, can't go back for the morning star until after dark lord's castle if you missed it at first, no clue for how to get a bag of fangs (need to kill a certain type of monster in the desert and get it as random loot), mazes), somewhat annoying music when posioned (doesn't last long though), not enough MP restoratives in the early to mid game and ethers don't restore much MP – changes after a certain point, some plot oddities (Lorim's king will act as if you've already met if you go get the ice sword before meeting him, no NPC dialogue update in Jadd after beating medusa and davias, amanda can heal you from petrify but not herself, davias isn't suspicious of the hero, can't see and communicate with the girl from outside the airship until you've talked to her from the inside first (she should've been able to see you), repeats some enemy types several times and most enemies don't actively try to attack you, some NPCs act like pieces of a walkthrough, gain no exp from frozen enemies, the davias and kraken boss fights are basically battles of attrition (can use charged up throw attacks vs. davias but it's pretty slow), can't sell the battle axe nor the chain whip, a bit repetitive and there's not much to do between most dungeons except get to the next one or find a shop, chests dropped by enemies sometimes get stuck in walls, some dead ends, can't teleport to visited towns (once you can travel across water you'll be able to revisit towns and other areas though the "docks" which let you get back on land are pretty few which can lead to some backtracking), sometimes sloppy hit detection (mantis ant), can't avoid damage from some traps (mantis ant room)?, somewhat drawn out final dungeon, goofy and crappy enemies in the very last area
​