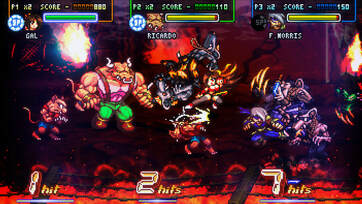 
​+
Fast and tight movement (very similar to Streets of Rage 1-3, specials can be used without penalty while their meter is full - otherwise you lose a bit of life, can press jump to quickly recover after getting knocked down or during a fall)
Fun and pretty complex combo system (can finish a combo with a forward or backward throw without grabbing first, can bounce after doing a jump kick to perform another one if you hit twice with the first kick, can follow up any attack or combo with a special which performs another 3-hit combo and then follow that with another punch combo followed by an upwards jump kick combo for 19+ hits (!) in total, can perform two punches then a grab combo that gets the opponent in the air followed by another punch combo and a throw (10 hits), different special depending on if you press forward or jump at the same time, can extend a combo by hitting an enemy in mid-air, can keep hitting an enemy in mid-air right after throwing them)
Exaggerated physics
Control config
Skippable and speed up-able cutscenes (besides the endings)
Pretty good art direction (similar to Rocket Knight Adventures and Streets of Rage) and great animation overall
Various optional filters for a CRT TV/arcade screen look, Separate volume sliders for sfx/voice/music
Difficulty options (only normal and hard by default but easy mode is very easy to unlock)
Enemies can explode and turn into skeletons (random?)
Some alternate paths (no alternate final boss though?)
Some good bosses (turtle team, first bouncers encounter, final boss)
Multiple endings ()
Timing-based block/parry move (hard to pull off against most enemies though due to their non-existent wind up animations) - also fills up your special meter so it can be worth it
2-player co-op, 3-player co-op and CPU ally mode (the latter two are unlockables, the CPU player is kinda dumb)
Tons of enemies on screen at times
Enemies can accidentally hit each other with ranged attacks
Can still combo while wielding a melee weapon
A few interesting level gimmicks (swamp, raft ride, hostage rescue)

+/-
Unlimited continues and mostly frequent checkpoints (a bit further in the forest with the TMNT-like knife boss). Three lives per continue
Only three playable chars - can unlock enemies and bosses but they're not properly fleshed out
Stereotypical chars in terms of gender
Specials don't stun larger bosses but you do get invincibility time during them
There's an invincibility+extra AP power up but it's very rare
Some nods to the TMNT games, Tachi no Banka (or Double Dragon 2 NES - side view segment) and perhaps Alien vs Predator as well (air juggling)
Non-interactive tutorial (video before the game starts)
Quicksave (temporary save) but no proper save feature
Imaginary walls at the edge of the screen let you keep juggling enemies as if you're hitting them against a wall
Can't jump sideways or start moving in mid-air after jumping upwards

-
The tutorial doesn't explain blocking nor finishing a ground combo with jump attacks
Some control/interface issues (quicksaving is a hidden feature - have to start a new game with the exact same setup and the game will ask if you want to continue the last game (should've been a continue option in the main menu instead), double tap to run and to side dodge - can't be mapped to a button, no backwards dodge, main menu doesn't wrap around, sometimes slightly unforgiving hit detection, can't map blocking to a button either - have to press towards or away from the enemy on the d-pad right before they attack, unskippable boot up logos, some of the tips unlocked as you play just repeat what the tutorial taught you, can't turn off screen shake - a bit much in 2-player)
Difficulty spike before the final boss (huge if you didn't know about blocking which is likely, can cheese the three dobermans/bouncers to fight only one at a time however) and you mostly can't make use of the crazy combos here. Another one at the raft ride segment
Some trial & error (various boss patterns, exploding bike in the elevator, only get a few seconds to pick up a knife before the hostage scene in level 1)
Can't keep a health item or weapon on you for later use
Pretty repetitive (repeats enemy types a lot, not much level architecture variation, few hazards and pits, no platforming, there's a surfing level but it plays like a regular one besides the visual change, some spongy enemies as Gal in 1-player mode)
Not enough pits
Annoying arbitrary invincibility times and hit stun canceling on the wrestler bosses
Some cheap hits (the cat guys' somersault attacks which hit you over and over)
Larger weapons and ones that aren't thrown are relatively rare
Have to unlock training mode, cpu partner mode and turbo speeds (higher gameplay speed) - have to buy these in the extras menu with points gained from playing
Overly high contrast and saturation overall
Final boss rips off Streets of Rage
Kinda low visual variety at times
Weak wall bounce attack
F.Norris plays a bit too similarly to Gal

​
Bugs:
-Sometimes the juggling physics get a little glitchy
-The master volume suddenly goes back to default when facing the final boss (then goes back to what you set it to)

Notes:
-Beat it on Normal as Gal twice, then once as F.Norris with Ricardo as a CPU ally. Got endings B, D and F
​
​