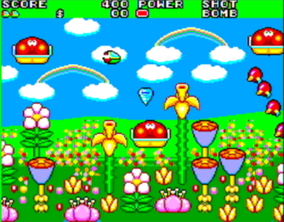 +
Still trippy
shop for equipment (lots of it)
good bosses overall (most of them can be taken down easily with heavy bombs or fireballs though)
warps make levels a bit longer
stationary shop
new weapons, lifebar (upgradeable to four hits with some invincibility time between them) and shield power up (three extra hits), hidden shops and items (potions that either extend your lifebar (red) or refill it (blue)), sprite scaling (face boss), great art direction and use of colour overall

+/-
Some bosses become super hard without the right weapons (pillar face, dragon, 2.5D face, final bosses)
no strafing (moving backwards and firing) in the final level
no auto-fire for the regular weapon until a few levels into the game

-
​Controls take some getting used to (loose scrolling)
a bit repetitive
it's possible for the scrolling to glitch out a bit if you go at high speed then tap in the other direction
no diffculty options
some slowdown and flicker
​trial & error (extra health won't help if you move into a spawn point, boss weaknesses, hidden shops and items, boss gauntlet at the end), no map or indication or how many spawn points you have left to destroy, hard to recover later on since you need to backtrack to a shop with engines in it (except for in the final level but you also can't grind for money there), no health bar or other indicator for the shield, less memorable and often high pitched music/sfx


Comment:
Great sequel. Sega expanded on the Defender-like concept here with an interesting new warp mechanic, and new strange weapons to try out. The game features excellent visuals for the system, but I feel the music was less memorable, and a bit more tinny sounding in its PSG form. It's also a bigger challenge than the first game, and a longer one, making it feel more like a console experience.