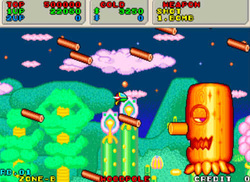 +/- Simplified stage layouts (two sections compared to 3-5 on SMS ver., meaning fewer background changes), reuses the old shop system (zeppelin comes in from time to time (set pattern?) instead of set locations (SMS), timed weapons, hidden time limit on stages (a chasing 'ghost' appears after a while like in Bubble Bobble), items become increasingly expensive after each purchase, each purchase of a bomb special comes with a pack of ammo (then it's marked as sold out in the shop until you die), somewhat forgiving hit detection (works both ways for some enemies), special weapon works like an extra HP (if you get hit you drop the weapon but stay alive)

- No Auto-fire? (Arcade ver.), somewhat fewer weapons (shops change assortment over the course of the game), no separate button for bombs/specials (hold bomb button to charge it), somewhat loose scrolling (makes some enemies very dangerous if you leave them be for too long), some trial & error (second to final boss (the snake robots) - need to save your money for a good special weapon here or the fight gets extremely tough (also need to save for the tear weapon to get the best ending), boss and enemy patterns), somewhat repetitive, time limit on shops (~20 seconds)


Comment:
A great remake of the SMS original which stays very true to the feel of the classics while keeping things fresh with some new mechanics, quirky bosses and multiple endings. Basically yet another happy pill in game form (well, except for the bad endings), it should've been an obvious choice for a VC or Steam release.