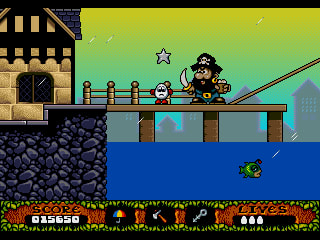 
​
​+
Can examine any inventory item for a hint/instruction on its use
Pretty good art direction (character artwork and larger NPCs look like the box art from this era in the series), good use of color (hilight mode for backgrounds?), weather effects and day/night cycle (no effect on gameplay?, Dizzy looks sad when it rains)
Decent variation
Mine cart segment (top down without platforming though - instead you switch paths)
Some shortcuts in town (it ends up becoming a partial hub area if you bring the gold item to pay the troll guard)
persistent items in that they stay where you put them, some decent puzzles (medicine potion mixing, empty chest used to reach higher, use a mirror to make the boss hit himself), single screen light gun/gallery shooter mini-game (beyond the castle gate)

+/-
Can't duck or run
Can't attack (besides the shooter mini-game) or block
Can't simply talk to (most) NPCs to ask what they need - the leprechaun is a bit confusing in that there's just a sign of the bean used to grow a ladder but you also need a clover item to make him move first
No vertical scrolling
Items are often just placed randomly instead of near a platforming challenge or where they'd belong
Placed health items which don't respawn - can't carry them with you for later use, very frequent checkpoints, mostly single use items that function like keys in logic puzzles (except for the scuba gear and the fins plus the rope which lets you swing across a few gaps via hooks; the trampoline and empty chest also let you reach higher but these are only used once) - it's good that items disappear after they're no longer relevant though, mostly small sprites, many puzzles are pretty obvious and end up being more like fetch quests, generic damsel in distress story though some characters are kind of charming

-
No continues and only three lives+no save or password save (only way to gain lives is by finding and beating timed tile sliding puzzles, game takes almost 2h to beat even if you know where to go)
Overly limited inventory (only 3 item slots) considering how open-ended the game structure is - really annoying at the other side of the mine cart segment with the point of no return
No map besides the small one in town
Forced collecting of 250 (!) generic star items
Control/interface issues (have to manually use keys on doors and many keys look the same so you have to go into the menu to check them, sometimes you'll roll several times after landing from a jump and I'm not sure why, you jump higher if jumping sideways than if jumping upwards, no mid-air control, no jump height control, no invincibility time after taking a hit (see Turrican), can't see your health bar unless you're taking damage, can't quickly switch between active inventory items with a button press or combo - have to place and pick up the current one to switch by cycling the items one slot, have to go into a menu screen to examine an item (somewhat slow transition), )
Trial & error (no clue to the frog puzzle (make the prince kiss it - a bit hard to tell that he's a prince and you can't talk to him) nor that you need to give the mini-cow to the shopkeeper in town?, water kills at one point but at a later one you can go down and move around underwater (need scuba gear to not drain your health though) - but then in town it kills again! (wtf), trying to jump over the bull near the beginning damages you even though it looks like it's doable (its sprite extends upwards like a wall), some enemies kill instantly, sometimes hard to tell what you can stand on, sometimes hard to tell an NPC from an enemy), some enemies knock you back pretty far+knock you over for a couple of seconds, it's possible to get stuck by placing a crucial item in mid-air while falling from having dug with the spade in the graveyard - can't pick it back up if you did, plenty of backtracking unless you know the game well, uneven sound design for the music (some tracks use sampled rums and sound pretty good while others use just 2 harmonies with one being a standard sine wave), no raft ride in this version (the area between crystal falls and pirate ship is blocked off)

Notes:
-There's a code you can use that increases lives by one but it only works once...
​-First released for NES in 1991 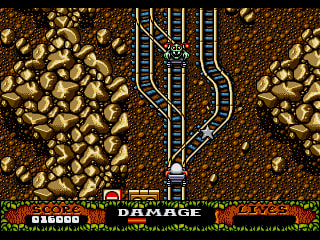 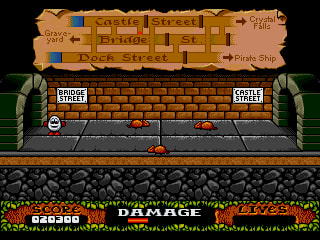 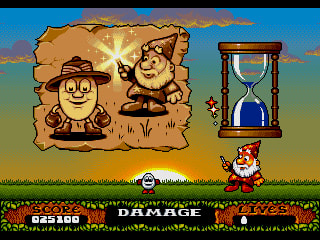