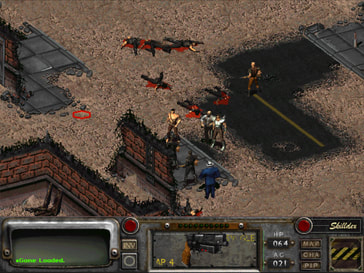 
​
+
There's usually more than one way to beat a quest/get past an obstacle
great customization
lots of fun to use weapons
awesome character creator
excellent dialogue and great VA overall
great cutscenes, long quest with multiple outcomes, decent AI (you can set ally battle tactics and the system is pretty advanced for the time), great humour (some 4th wall stuff), special encounters (sometimes funny or bizarre), get a car (speeds up world map travel), mistakes in character creation usually aren't fatal since you can gain stats and change traits later on, open ended without lacking focus, huge and immersive postapocalyptic world, keep playing after game completion (not much point, people act the same)

-
Slow start (unless you go for a Melee build)
no wall transparency when inside buildings
the interface takes some getting used to (using some items can be clunky)
slow paced (some animations can't be sped up)
the pathfinding isn't the best
​unbalanced perks/skills/traits (many are near useless), the game clearly favours the 'good guy sniper' type (melee isn't nearly as efficient as ranged fighting and evil characters will miss lots of quest exp), graphics and interface are pretty much lifted from the prequel, strange and slow knockback mechanic in melee, can't rest in VC even as a Citizen (or get quests from Stark), can't walk through party members outside combat, can't tell party to retreat from battle, not much interaction between NPCs (or between them and the game world),  all mutants look pretty much the same (despite being Super Duper), pretty easy end boss (especially for a diplomat), nobody mentions the brotherhood (and their explanation is rather lacking to say the least), you don't get to know what happened to every NPC after the ending - only Myron


Bugs:
-Lots of minor bugs (the game not displaying gained exp from quests, must do Torr quest immediately if you talk to him or he'll get mad (also can't bust the 'bugmen'), walk out on the robot in Klamath and it becomes peaceful, guard in Redding casino, etc.) - over 800 in total
-One major bug causes npc party members to stop following you,
​
​