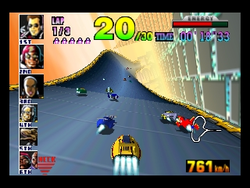 ​
+
Good sense of speed
4-player vs.
​camera options
difficulty options
30 different hover cars/drivers to choose from
30 cars simultaneously in a race, interesting boost/health dynamic, super excited announcer, options for boosting speed or acceleration while decreasing the other skill (acceleration is never useful?), some creative courses (jumps, pipelines, pipes which can be circled around like in Proun), drift (slows you down) and spin attacks, 30 courses, battle mode (single player only though)

+/-
Arcade physics (fun but can become a problem in some courses such as the one where you traverse a pipe-shaped segment)
limited lives during cups (used for restarting a race)
obvious handicap near the finish line when playing on Novice (instead of making the entire race an even challenge)
jumping efficiently takes time to master
falling off the track costs a life (instead of just putting the player at a disadvantage like in Mario Kart)
lack of power ups (missile attacks, mines, etc.),

-
Pop-up (especially annoying when it happens with the speed boosters since they are crucial on normal/hard)
car polygon models are simplified while moving toward/away from the camera
repeating beeping noise when low on health
somewhat overly sensitive steering
being hit from the back is too much of a problem on normal/hard because it makes your car start sliding while losing crucial speed
​unskippable end of cup cutscenes, trial & error (forced sliding when turning at high speed or in certain ways in curves/twists in the road which you need to memorize, need to learn some unintuitive mechanics for later on)