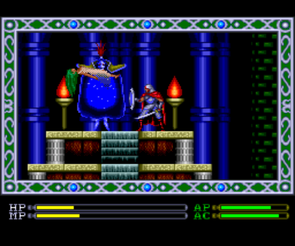 ​
​
+
Speed up text on a per sentence basis
Unusual setting (Arabic during the crusades with fictional elements)
Pretty nice animé cutscenes overall
Save feature (only in overworld areas, 3 slots named after current location)
Run button in the overworld
Dialogue portraits
Pretty fast paced action
Can destroy some projectiles with your sword
Magic attacks (pretty effective and cheap) and healing
Warp out of dungeons

+/-
Tells a more negative version of the crusades (at first anyway)
Travel between locations on a map screen
Can't escape boss battles
One healing item is called "heart poisons"
Can't move while slashing
Can't play as any of the other party members
Some darker/adult themes (some which are basically violence porn such as being able to watch a torture for or people burned at stakes but not intervene, also can't help the people in a labour camp except for the important party member)
Linear structure and can't go back to earlier areas at certain points in the story
Can't save the remaining Kantari from the bad crusaders?
No real meaningful yes/no questions?
Can't see enemy or boss HP, some gore, no alternate main weapon, no block or dodge

-
Starts out kinda tough but gets pretty easy towards the end and has an easy final boss (Baccus is a decent challenge though unless you grind and get the best equipment first)
Some enemies and projectiles move too fast considering the zoomed in view (means you have to take it slow in any new area)
Some control & interface issues (loose upward scrolling, can't jump down through platforms you can jump up through, no item descriptions in-game, slashes are canceled if you attack right before landing, can't move or turn around while crouching, fixed jump height (pretty high), clunky downward stab (stops forward movement, can't be canceled out of), can't sell equipped gear, can't see gear stats in the shop interface, very small text boxes)
So-so voice acting overall
Unmarked shop buildings in towns
Trial & error (some leaps of faith (can't loop up/down) - at one point you'll have to redo several screens if you fall down, shots from off-screen)
Unforgiving hit detection against some bosses (especially the second one - knight on horse)
Can't move backwards in som dungeon areas
Some level and money grinding
No inns (but you regain MP from traveling to towns)
Some translation issues (in the second town there's a yes/no prompt which should've been reversed)
No dungeon maps, some long mazes, somewhat annoying dialogue noise (but if you hold the button down during dialogue it goes silent), no quest log or journal feature, sometimes unfitting music (dance/techno), sometimes odd color choices, some backtracking (can't find the diary in the lanker cave before first talking to someone you need to rescue about it in the forest dungeon), dungeon tracks don't loop properly (fade out instead), somewhat bland dungeon design (lacks puzzles and interesting platforming gimmicks), plot oddities (Sadler doesn't really confront Yuug (Shimbatha/Hyram's ancestor? aka the blonde guy) about killing the rest of the party after traveling back in time, nobody in Eleusis reacts to Baccus being killed?, Pythagoras/Yabanchara asks you to lead him out of the Baccus shrine but it's not needed, seems like there's some missing dialogue between Pythagoras/Yabanchara and Sadler), pretty obvious who was the villain from the get go,


Bugs:
-Sometimes can't talk to an NPC if it's right at the edge of an area,
-6-button mode glitches out the controls