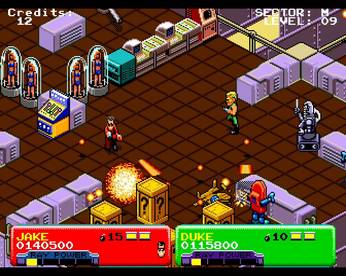 
​+ 2-player co-op, decent initial variation (mixes in jet scooter maze segments), large and detailed bosses, shoot in twelve directions, duck behind cover and under some enemy bullets, temporary shield and speed upgrades, upgradeable weapon, bombs (press all buttons), partially destructible environment, voice and text tutorial messages (annoying how they pause the gameplay though), nice western retro sci-fi art style, difficulty options (lives per credit, coin worth, three modes?, no. of continues allowed), hostage rescue (points which lead to extra lives, no need to rescue everyone and not much penalty for accidentally shooting them), alternate paths through the game (see a level map between levels - can choose path in the maze segments),

+/- Can't move while shooting or crouching, some invincibility time during bomb blasts, bombs have pretty short blast radius, an arrow tells you where to go at all times, respawn on the spot (don't lose weapon power or bombs), weapon power drains constantly, stand and aim while shooting by holding the button down, can't insert more coins after entering the final area (can also buy more lives and bombs at this point by pressing all buttons), dropped gems (weapon power) disappear very quickly, annoying drone enemies spawn if you stand still (every 8-10 seconds or so, they're hard to hit and hit you easily)

- Credits stop working in the final level (and the shop right before it only lets you buy up to 7 lives and 8 bombs which means there's a pretty big difficulty spike there), some control issues (delay before you can start moving after shooting (can jump instantly though) or running into a wall, delay from the fall off a ledge animation - kinda pointless when you can't fall off and die/take damage, easy to get stuck on walls and other objects for about half a second), no strafing or dodge moves, no alternate main weapons, so-so use of FM synth (somewhat better music on Amiga) and kind of garbled voice samples (possibly intentional for comedy though), gets repetitive after a few levels, limited credits on default settings (F2 for options), hard to react to walls in the jet scooter maze parts, somewhat awkward walk and run animations, repeats some boss types, cheap hits from drones hidden in boxes,