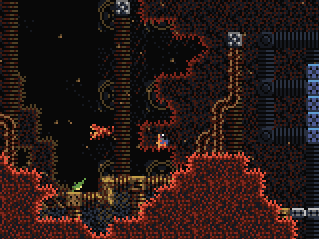 -
Some interface/control issues (the map doesn't mark colored block barriers/"access lvl x required" barriers/air stream barriers/the drilling machines and doesn't remove/fade out markers for collected upgrades, can't place map markers, can't access the options while in-game, oddly semi-sticky physics when jumping in-between 1x1 platform tiles - you stick to the block and lose some momentum if you don't keep holding the direction you jumped in, higher default jump height on the double jump, the hookshot disappears after one swing instead of letting you hold on and build up more momentum either by swinging or extending the beam if you made a mistake (can use it again in the same jump after letting go however) - various segments punish you with high damage or death if you make a mistake, no map icon explanations for the zoomed out map view which is much more efficient for browsing than the zoomed in one, no mini-map, no message log, somewhat slow screen transitions, )
Trial & error (death wall at the end of the room below the supercharge module, the segment past the "moon gate" doesn't seem doable without dash booster x (also hard to make out some of the blocks there), the game traps you into fighting the hive boss until you beat it if you save before it (no warning that you're about to face it), false wall in the NE temple area that you need to pass through to progress - no clue, most boss patterns - some randomization here, the single save slot system makes you reluctant to save in the damaging part of the lava area, some open paths don't show up on the map - underwater path to a rough map item early on, some cheap enemy placements - certain tentacles, hookshot platforming segment to the left of the conveyor belt tap in the lava area followed by some tricky platforming through hazards and flying enemies+your HP is slowly draining - you shouldn't even go there from that side as you're supposed to enter the path from the left with the dash to get the health upgrade (and if you go further you can get to a save point but not get either the diskette or the upgrade near it - if you get the diskette without the heat suit you can't make out!), some hidden paths make you shoot a random wall several times, if you dash upwards into a different screen then you can dash again during the same jump after performing a double jump (dash, double jump, dash again) - needed to get the optional plasma field upgrade (alternatively you can teleport into this room after entering it), the gold teleporter near the beginning (eastern first area) looks like a regular one on the map, invisible walls to the sides in the space below the overmind boss)
Sometimes uneven difficulty (spikes: the insta-death spikes segment (huge spike, optional though), the game arbitrarily removes the supercharge module for the southern dark red area boss fight and the rng is pretty tedious here, southern dark red area with the black enemies, overmind boss's second phase, bright green area with the second orb robot boss - long and kind of tricky platforming segment before it and then the game doesn't let you save, overly demanding hookshot challenges for items such as in the lava area pretty early on, western "dark green" area, southern lava area, overgrowth boss if you didn't get the optional triple shot upgrade first; dips: easier temple and SE dark grey area bosses than the overmind boss, final boss with the supercharge module)
No drops from enemies
Some pointless one-way paths (one point near a tube puzzle in the "dark green" area, north of "dark green" area near the fishing NPC for example, some falls here and there, path between the dark green/desert and dark brown areas for example, sudden barricade appears for no reason in the northern green area if you go inside and back out at one point (due to the chain reaction switch's effect not being persistent), between the lower dark grey and lava areas)
Some minor dead ends (for example in the NW "dark green" area which you can enter from the W with some tricky hookshot jumping but then not be able to proceed, at one point you go through a blue barrier only to find a red barrier in the next room) and some dead space (if you try to explore the main computer area before turning it on you can go all the way to the four main gate switches but not activate them and there are almost no hazards in these rooms yet)
Some other tedious aspects (some spongy enemies, some repeated tutorial messages, some backtracking for the desert area teleporter if you failed getting the diskette to the right of it - pretty easy jump though, some pointless gates are added after activating the main computer such as the one right next to a teleporter in a room with a teleporter and a save point (it's there even after beating the second orb boss - the one in the bright green area), no save point near the hookshot challenge room with a giant worm and a bunch of jumping crabs/antlions in it - optional as it leads to a diskette though)
Some clipping in the main menu music

​
Bugs:
-Some issues with the controller support (had to use either joytokey or the d-pad only setting which actually means stick only with a PS3 controller)
-Hit detection bug in the bottom right of the lava area near the HP upgrade that you get to with the hookshot - lets you go through the one-way platform before the room with the upgrade in it
-The game once glitched out in the lava area and made it so my avatar stayed in a swimming state after exiting lava thus continuing to lose HP until death
-In the separate spaceship area with the hive boss, one computer talks about marking a location on the map but then it doesn't