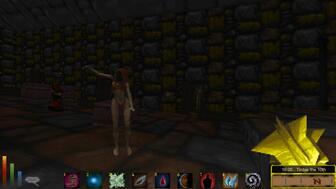 Unity:
Fixes many bugs and adds a command console (quest relevant enemies spawning outside of bounds or outside of where you can reach them, having too much loot crashing the game, better hit detection, wagon items don't disappear, better dodging no longer makes it harder to hit enemies, fixed damage and armor info via tooltips, end-game gear appearing in taverns, etc)
Unlimited save slots
New climbing system allows for climbing around corners
Can make the dungeons smaller (SmallerDungeons = True in the settings.ini file under the Appdata path). They're still pretty big
Improved enemy AI (pathfinding - still has some issues though)
Magic item pop-up menu (U)
Optional enemy infighting between different types - fun but also makes the game easier and they can start fighting before you even see them which is weird
Optional magic item repair and instant repair services (can take one or more days in the original) - both make the game easier
Optional starting dungeon (can also randomize it with mods)
Option to choose which quests to take on when requesting them from a faction/guild (still checks your rank)
Optional near death warning
Option for alternate random enemy selection (uses a different seed for spawning enemies so kinda like a randomizer-lite for it)
Click to attack option (random swing direction). Originally you had to hold the RMB and swing, which has some potential but this feels a lot better
Higher res
Can auto-configure fast travel to most locations registered in the quest log (convenient quest log; also makes it easier to browse active quests)
Improved location search function for fast travel on the map screen and you can view adjacent regions through it
Banking info added to the character menu (F5)
Ingredients that were different but had the same name now have unique identifiers such as "northern" and "southern" to make clear which is needed
A message now informs the player when an enemy has been pacified through language skills. Resting and fast traveling are also possible while near pacified NPCs
Acute Hearing, Adrenaline Rush, Athleticism were given an actual function
Personality attribute stat can't be dumped (need about 40+ to get favorable reactions from townspeople rather than 10-15)
Quest items must remain in the inventory at all times when the related quests are active while in the original they could be stored in the wagon and dropped from the inventory. This was done to avoid getting stuck during some quests (could accidentally sell quest items) and you can get around it with a cheat if needed
Travel Options mod (time accelerated travel in the overworld as an alternative to fast travel - pick the fastest option in the FT menu and the game makes your avatar auto-run towards the destination while in-game)
Max loiter (waiting) time slider
Mods for Additional outdoors/wilderness random encounters (warm ashes, includes encounters that lead to new quests) and wilderness NPCs, Added wilderness hills and mountains mods
Inventory search filter mod (type in the kind of item you want to show such as weapon or armor)
In-game tooltips mod, Display NPC (and enemies) health mod
MP regen mod (tweakable)
Convenient clock mod (adds a customizable clock to the HUD so you don't have to go into the Info menu to check)
Lootable dungeon weapon shelves mod (based on luck though)
Floors you're not on become semi-transparent on the building and dungeon map screens
Shield blocking mod (if well timed can stop enemy attacks)
192 hidden skyshards mod (they're all placed in the wilderness, +1 to an attribute in a set order for each one found)
Graphics mods (DREAM, handpainted models, enhanced sky, etc.)
Critical Hits fix mod (without it the critical strike skill actually increases the chance to hit instead; note that enemies also get a chance at critical hits though you can tweak it to give yourself an advantage as well as tweak the damage modifier)
Can have converted enemies follow you around in a beeline with the language overhaul mod (can trade with them, ask where you are and tell them to stay/follow)
Can sort spells and change their icons

Unity:
Arrows no longer ignore walls
More nuance to guild membership - a character can be demoted to a lower rank within a guild when the character's guild reputation drops below the minimum threshold for the character's current rank.
Persistent dungeons mod (without this the dungeons reset when exited, spawning a new layout with new items etc.; ). Two issues: Recalling into or out of a dungeon isn't supported; oors and action objects (levers, platforms etc) are saved while in motion, so it is possible to leave a dungeon while they're moving and come back later and they will start where they left off
Guild quest access change (not sure if good or bad): Mages' Guilds and Knightly Orders would originally offer quests based on guild rank or character level, whichever is higher. The other guilds would use rank alone. In Unity, all guilds use rank only.
Could also climb ceilings (hanging mode) in an earlier version but it was removed due to bugs

​
Notes:
https://en.uesp.net/wiki/Daggerfall_Mod:Daggerfall_Unity/Gameplay_Differences
https://en.uesp.net/wiki/Daggerfall_Mod:Daggerfall_Unity/Character_Creation_Differences
More including bug fixes: https://forums.dfworkshop.net/viewtopic.php?f=4&t=1662
-Not enough contrast on the 2D sprites when using the graphics mod (DREAM)
-Buoyancy=Water walking but is considered a thaumaturgy and frost element spell? (UESP guide)
-A skill turning grey in the character sheet menu means it had leveled up since you last looked at the sheet


Bugs:
-During the assassins quest in Tamwick only one of two enemies spawned at one point and this made the quest unfinishable
-Same thing happened during the gothway garden ransom quest
-Sometimes quest log entries are duplicated
-Some enemies can't go up very steep slopes (skeleton warriors) and some kinda get stuck halfway
-Encountered a bug that made Silence stay active on my char after supposedly wearing off - had to reload the save
-In one dungeon a cage was placed right in front of the only door leading forward - I could glitch through it but not back again, had to teleport out
-Didn't receive Medora's vision (dust of restful death, maybe I just clicked past it by mistake but that's also an issue) but could continue the quest by visiting Gortwog
-Level Up Adjuster mod didn't work for me