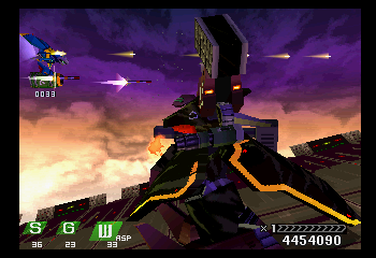 ​
​
+
Sub weapon/gunpod inventory (only 3 slots for the default ship though and picking up a new one when at full capacity will replace the current one - can lead to difficulty spikes)
very good art direction and animation overall (cutscenes look a bit generic)
basic sub weapon aiming options (two modes, high/low or forward/backward (spreader, grenade))
manually adjustable speed (4 modes)
sub weapons also work like shields (R-Type), some large and detailed models, difficulty options (easy-hard), 2.5D elements, level hazards, pretty nice boss intros and explosions, mini-bosses, great bosses overall (several phases and destructible parts), control config (before play), choose between three ships from the beginning (can unlock two more), some ships can combine two sub weapons and one has 2x the main weapon, auto-fire, some interesting sub weapons (one lightsaber-like sub weapon which you can also use a combo move with to perform a giant slash attack, electrical charge attack, controllable missiles (mosquito) - however your ship moves as well), four unlockable hidden sub weapons, upgradeable main weapon if you use the unlockable Die Schabe ship (becomes 2x at lvl 6, 3x at lvl 11, 4x at lvl 16 (max is 20)) and sub weapon rate of fire (upgrade the main weapon by collecting sub weapons, rate of fire resets when the main weapon multiplies), point multiplier (a bar that fills up as you kill something but then quickly depletes, kill many enemies quickly in a row to get more points, killing with the sub weapon gives more points and hitting more enemies at once with it even more points), basic ranking system (score is shown at the end of levels based on: enemies killed, sub weapons collected, time it took to kill the boss/repulse time, lives left; after beating the game once it keeps track of your previous scores and compare them to your new ones like in a racing game), some nice effects (lighting, water surface), very good variation, good and bad endings (have to destroy the final boss before time runs out to get the good one), manual scrolling when fighting the second to final boss's first phase (a large rocket going into space), faux ending before the final boss, skippable staff roll, unlockable art gallery

+/-
Checkpoint system (fairly frequent, lose all sub weapons though)
ammo-based sub weapons and they disappear completely when it runs out so you can't keep using one as a shield - you have a default shield (manipulator) but it's very small
german voice overs by some enemies during levels (no subtitles)
sub weapons can be destroyed by enemy fire or moving into walls/other objects
sometimes shifts to a diagonal perspective on the z-axis (kinda pointless but looks cooler)
"hedgehog"/vertical mortar-like shot is a bit situational (short range, can't aim diagonally?), no analog support (could've been used for the vulcan (which aims opposite to your movement) and the controllable missiles), doesn't automatically switch to the next sub weapon when one runs out of ammo, extra lives system, doing some unexplained tasks (generally shooting down some hard to hit enemies or part of a boss before other parts) sometimes unlocks a new path in a level, auto-switch to the newly collected weapon (occasionally bad), fairly easy to accidentally destroy sub weapons in some segments, no shield or hp upgrades, some nods to Gradius in the level design (vertically scrolling multiple floor segment), gets much harder after the first 5 levels

-
Limited continues (10 on normal)
sub weapon power ups fall off screen pretty quickly
trial & error (final boss's giant laser attack, occasionally hard to tell what will damage you - can stand between the legs of the level 5 boss for example, some fast attacks from behind, some bosses have temporary invincibility between phases and while dying (can make you waste ammo), figuring out what gives you secret bonuses, bosses can escape if you don't kill them quickly enough (hidden timer))
enemies sometimes move back and forth into the background for seemingly no reason
can't upgrade your sub weapons
sometimes uneven difficulty (some segments are much harder with the wrong sub weapon, tough beginning of the level 4 main boss, ), somewhat awkward isometric view segments (rare though), some longer pauses in the action, ​the spreader sub weapon kinda sucks later on
​