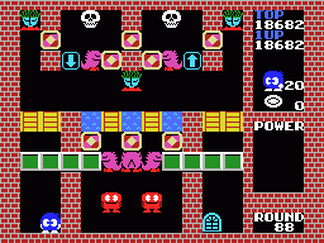 ​
​+
Pretty creative level design (evolution of Sokoban: can move half a tile's length, can block two tiles with one block, distinct enemies, can shoot some enemies (certain jewel icons give shot ammo) to turn them eggs which can be pushed around (can be used as temporary boats if pushed into water in some levels) or shot to remove the enemy from the level for a short time, timing based puzzles, arrow tiles - one way movement, still water and water streams)
pretty good variation
construction mode (basic level editor)
good length (105 levels)
password save (pretty short but only once every five levels)
two game modes (types a and b - a plays like the NES game, b adds a time limit and hidden items you can collect for points), unlockable final five levels (get part of the special word in the bonus levels - these are quite hard though), limited special abilities in some levels (flip arrow tile, place bridge, place block), can use some enemies as shields against other enemies, good puzzles overall and starts off fairly easy, some levels have more than one solution,

-
Can't rewind (have to reload via password which kinda sucks since you only get one per five levels cleared)
some control issues (slow movement, can't turn around without taking a step, stiff controls when turning corners)
the music pauses when you shoot
trial & error (knowing how many shots are in a level, knowing how streams go in a level, in round 87 the snakes respawn in a different spot if you block their respawn point with a block, hidden exit in some levels, need to write down each part of the special password, mechanics)
uneven difficulty (spikes at round 86 for example)
​some slowdown at times, no ending


Comment:
This is the first Lolo game, a pretty underrated series I think. I thought it would be rather primitive being from 1985 but it actually holds up quite well and nails all the basics of the NES games, though the controls are a bit worse and there's less variety in mechanics and enemies. You only get a password every fifth level here but just emulate and the problem is solved. One interesting difference is that after every fifth regular level there's a time limited one where you just defeat enemies with unlimited shots and unlock part of a password that leads to some extra levels after the main game is done. They can be quite hard though, and speaking of difficulty it's kinda all over the place throughout most of the game. Finally there's a level editor which is pretty cool for such an old game.