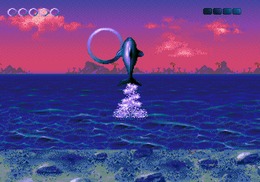 +
Great use of colour and overall animation, Some nice graphical effects
Innovative gameplay/mechanics (sonar map system, regenerating health (only for the last few levels though), context sensitive shot/speech, the mid-air 'springs'/helium bubbles, transforming into other animals (and even the aliens), riding with the flying dolphins, the tubes (water 'pipes' used to travel in the air which can be jumped in and out from any direction), stealth in the final level)
Fast and smooth swimming controls (with some exceptions - see below)
Improved sfx
Starts out a bit easier than the prequel
Good variation
Some good puzzles
Unique atmosphere (somewhat similar to Metroid or Another World; foreboding, creepy, lonely, mysterious)
Password save (short)
Difficulty options (easy (top right path), normal (right path) or hard (upper path; hard offers a few new levels))
Time travel (not controllable)
Fight alongside other dolphins against sharks and aliens
Temporary invincibility power up
Upgradeable weapon (gives you a four way weapon that can hit bigger enemies and really helps with avoiding the smaller ones; doesn't carry over to the next level though and you usually need to search for it)
Some interesting storytelling (NPCs showing you their memories through in-game cutscenes, turning into an alien worker drone when telepathically (?) connecting with the aliens after capture (to show their mindset or vision of the future?))
Some sequence breaking options (breakable rock wall in crystal springs
Fin to feather
Some walls in the final auto-scrolling level)
Good art direction overall

+/-
Silent protagonist
Checkpoints are rare (activated by the shapeable (thin or thick) crystals)
Unlimited lives
Somewhat limited map system (can't pull up a zoomed out version showing everything that you've explored so far (becomes an issue when trying to find the exit in some levels since they can be placed where there's a wall, maybe the weapon upgrade could've affected the map as well), doesn't show breakable rock walls)
Several fetch quests (the rebuilding of the asterite DNA goes on for too long and would've been more interesting if there was some sort of code to figure out (either with the glyph doors (which open at a set but non-intuitive order with each pair you find and return) or the order of the pairs))
Can't talk to the other dolphins fighting sharks
Cliffhanger epilogue/ending which is somewhat underwhelming in parts (interesting how it's interactive and the game keeps going after the staff roll but there's only in-game cutscenes used and the last music is just the time travel track from the first game)

-
Control issues (can't quickly turn up to down if near the surface of the water, Ecco will try to turn around if you boost right before jumping upwards between two water containers (tubes or pipes), game's picky about positioning when trying to make baby orcas follow you, poor rotation controls in mid-air, can't quickly turn around while moving diagonally (need to change to a cardinal direction), somewhat slow rotation controls, somewhat improved but still clunky mechanics for interacting with movable objects like rocks and turtles (could've let you "grab" the rock/turtle instead - see Puggsy or Bubble Ghost (lets you lock on to an object)), twitchy camera when bouncing around on land - possibly intentional but still kind of annoying)
Inconsistent about telling you too much or too little (in the first level one dolphin talks like a walking tutorial sign; in the second one just says 'do it' when there's an actual puzzle here with the crystals, then in the third level you're told by a dolphin that you've lost your powers after a mild earthquake like segment (this one would be more effective/make more sense if simply shown through the mechanics instead)
Pretty choppy rail shooter-style levels
Some tedious parts (getting the rhythm for loosening crystals right in the crystal springs level can take a while, it will sometimes take a while to match the right key glyph with the right door glyph (they could've shown you with a small cutscene, color coding or on the map), if you fall down in tube of medusa you have to get to and replay the level before it, can't kill or slow down medusa, in the level after tube of medusa it's hard to react to the 'springs' (bubbles in mid-air) while flying quickly through the air and it's easy to accidentally shoot at another dolphin instead triggering a conversation - the dolphins (especially the ones giving you exposition) should've been placed differently, fin to feather - very hard to avoid the big birds and you can't land on or touch cliff sides, level before 'sea of darkness' - backtracking if you lose track of either of the dolphins supposed to show you the way (why can't they just slow down a bit if you're lagging behind?, why couldn't the first one teach you the rock breaking song right away?))
Turtles disappear almost immediately after leaving the screen
Sometimes lacking feedback and animation (dying - screen goes black and there's a dolphin 'scream', hitting larger enemies like sharks - they just blink, eating fish, breathing through the seashells - need to listen for a subtle sound indicating that you've positioned yourself correctly)
Misleading and dumb second objective on the baby orca fetching level (the wall of rocks to the south east - you're supposed to follow one of the baby orcas to it and then it will be gone for some reason; why would the parent let its child go away again if it couldn't find its way back before?)
Uneven difficulty (spikes: tube of medusa, following the dolphins, time limit on the chains of starfish and they can be tricky to move around in narrow paths, sometimes air pockets are very far apart, moray abyss - the red serpent, end of the shark battle level; dips: some very short and easy levels, the queen fight)
Music tracks reset if you pause the game
Some trial & error (some enemies can kill almost instantly, pits in the first future maze level, can't tell where there are and aren't anti-grav rooms in the same level, figuring out some mechanics (like what the shapeable crystal (thin or thick) does or how to use the map, the final auto-scrolling level (easier than in the prequel though), how you can be swallowed by the queen without actually entering her mouth