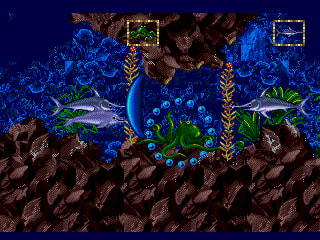 -
Too easy and repetitive (starts off with 3 basic fetch quests, then basic search and destroy, then a basic fetch quest again and there are mostly fetch quests/collectathon levels later on)
No NPC interaction?
Can't perform a dash (meaning you can't jump as high for example) nor attack here
Some control issues (object interaction is still clunky, turning around is still a bit slow, can't review a mission objective during a level, can't decelerate - moving fast (it's a toggle via a button press) is a bit too fast to react to obstacles so you end up swimming into them and slowing down to default speed over and over unless you know the level layouts, )
Untapped potential (the first two "tags" levels are way too easy, the simon says codes to seashell gates are too easy, the escort segments would've been more interesting with something to protect the kids from while escorting them, the "collect music note rings" levels don't bring any music skill into the mix and you can't collect more than one note at a time which leads to some backtracking, the "bring treasure to the crystal while avoiding thieves" mission is potentially interesting but a. too easy and b. it doesn't matter if some of it is stolen since the level still ends if you only brought half and c. you can't retrieve stolen treasure as it's being stolen and the thief can move through walls so the mechanic isn't advanced enough to be interesting, )
No difficulty options
Short (18 short levels)
Some slowdown
The visuals look more copy & paste with pre-rendered elements in the backgrounds that have inconsistent shading on them and some overly saturated parts (particularly bad color choices for the shipwrecks, there's also no "gradually darker as you go further down" effect here)
Sound design for the music isn't better than in previous games
Lame ending (the "big blue" whales don't tell you anything and then the credits roll) - at the least the in-game cutscene with one whale squirting water is decent