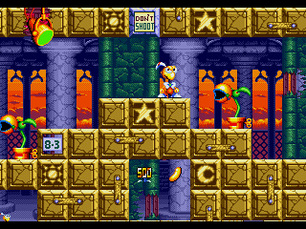 +/- Sleep to heal as an alternative to the bananas (nice animation but it breaks flow a bit, you can cancel your head if you took it by accident though), fairly steep difficulty curve, the negative power up (immobilizes you, annoying to get by accident during boss fights), no overall time limit (but there is one for most of the heads and it keeps going during dialogue scenes), pits don't kill instantly, limited continues (2 at first but you can get up to 8), forms/heads are lost when moving between areas, no jump height control (generally not a problem),

- Some trial & error, tedious bonus rounds, unskippable scene at the end of each level, can't cancel the mini form (sometimes makes sense but not in open areas), some battles go on for too long (stair wars/tower cat, tunnel shooter segment cat, chase before the final boss), no health bars on mini-bosses, can't attack/use your head when too close to the edge of a platform (triggering an animation), invisible wall at one point during the 2.5D semi-rotating blue floor segment (inconsistent with the rest of the segment), so-so explosion sfx