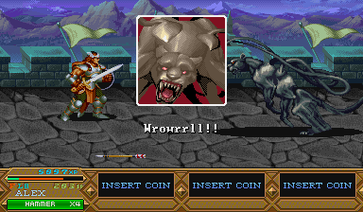 +
4-player co-op
Branching paths (you'll be given two choices at certain points via a dialogue prompt and there are also hidden paths in the stages),
Pretty fast paced
Four different characters (they mainly differ in which spells they can use)
Monetary system (buy HP and secondary weapons in shops) and level system
Great art direction and attention to detail, good animation, difficulty options (8 levels), inventory for switching between magic/sub weapons on the fly, blocking (using a shield, a bit clunky to use as you need to attack first) and countering (slam attack counter after blocking - need to be fast), transfer money between players when in the shop (place your hand above someone else's and press C), slam attack (Forward+A, hits for as hard as the third attack in a standard combo (4 hits) which can be cancelled by pushing in the other direction - can hit twice if done right, can hit knocked down enemies (attack when close, downstab, or slam attack (Cleric only)), some cool spells (Polymorph), most spells require some skill to be effective (unlike the smart bomb style of some games), crouching (down+jump - can attack knocked down enemies+very small enemies and more importantly pick up loot faster) and crouch attacks, roll/slide attack (attack while getting up from crouching) - can also be used as a dodge move, slide/back roll (for dodging, jump while getting up), stat boosting items (destroyable by the enemy) - lost upon death, NPC encounters with good dialogue for an old beat 'em up, some chest traps also affect enemies, no slowdown or flicker, can destroy enemy arrows, two jump attacks (downstab), some nice effects ((weapon drawing animation when beginning a level, lighting up dark caves, lightning and fireball spells), some very large and detailed sprites and one hug sprite (red dragon), pretty good bosses overall (the frequent stun attacks are a bit tedious in 1-player), pretty good boss introductions, can pick up and throw chests, can speed up in-game cutcenes, optional super boss (red dragon), running tackles,

+/-
Timed shops (not a big problem)
Camera focuses on player two (can lead to missing some attacks or drops for player one)
Need keys for some chests
Players can hit each other with bombs and thrown items
Somewhat randomized damage
Barely follows D&D rules at all (see Baldur's Gate for something more faithful), borrows some elements from Golden Axe, can't switch spells/subweapons while pausing, can't carry healing potions in your inventory for later use, pretty forgiving hit detection, unlimited continues (can't be turned off, can't switch character after death), can't throw daggers while jumping, deteriorating magical gear, can't buy gear (only sub weapon ammo and healing), can tackle enemies and stay invisible

-
No throws or grabs
No desperation move
Lack of advanced combos
Some control/interface issues (can't check what magical gear you're carrying, can't use sub weapons while crouching, can't switch to nothing (=special attack) if you have something in your inventory, the Y and Z buttons could've been used to simplify some moves, can't move forward while blocking, can't control jump height nor jump sideways, the dodge slide is a bit clunky to use, item pick up move is mapped to the same button as attack and also takes priority, double tap run instead of button press)
Experience points only affect the score - not if you'll level up at the end of a stage or not
Some trial & error (you'll sometimes miss out on loot if you killed all enemies in a scene before getting it, boss patterns, how time semi-stops during a spellcasting, unblockable attacks, no drops from polymorphed enemies), repetitive voice samples, no mounts, a bit repetitive (many re-used enemies), Fighter's no items-move not very useful?, somewhat muffled and distorted audio, invisible walls where you'd expect to be able to throw enemies into pits or water (first town) - no pits at all?,

​
Bugs:
-The language turns spanish for a bit during the red dragon fight 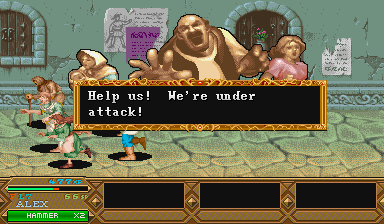 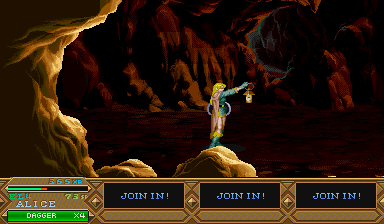 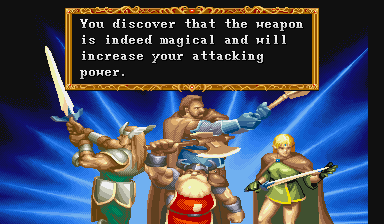 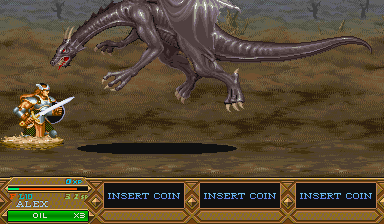 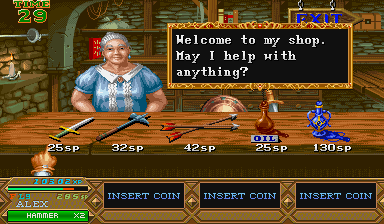 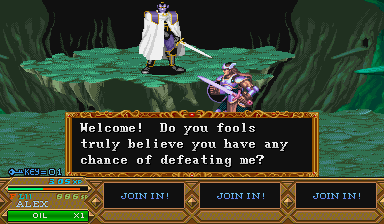 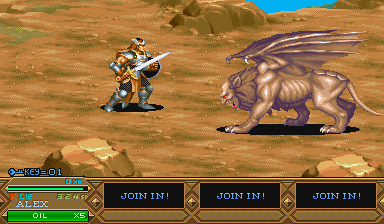 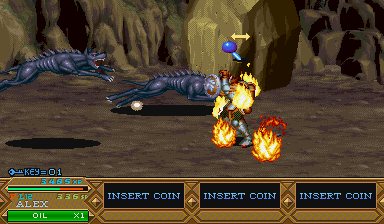 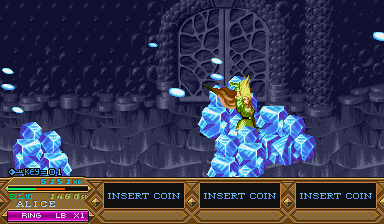