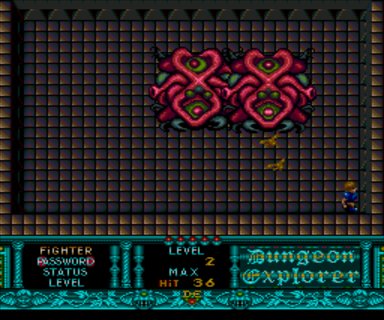 ​
+
5-player co-op
Choose between 8 different classes (can also unlock two more characters using passwords)
Can stand still and aim by holding down fire (8 way aiming)
Impressive music
Gauntlet-like gameplay with more RPG elements (an overworld with towns, NPCs in towns and dungeons, minor puzzles, item inventory)
Many bosses?
Open up shortcuts to previous areas as you progress
Auto-fire
Destructible enemy spawning points (most of them)
Teleport spell (bard only; back to the tavern in the first town)
Some interesting items (ring of resistance - makes enemies less aggressive, holy water - enemies flee), reflect shots back with the reflector item, smart bomb-style magic (only some classes), upgradeable movement speed (agility boots item), can destroy most enemy projectiles, respawn on the spot

+/-
Linear structure
Items are only described briefly on a screen which can't be reviewed before you start
Password save (short, while it can be accessed at any point it only updates after each boss - potions are also lost when it's used and you start in Axis village)
Can attack but not hurt NPCs
Enemies respawn as you exit a room
Animated HUD
Uses an extra lives system (start with 5 lives, seed of life=1-up)
No shops
Can't customize the classes (pick which spells to use for example)
Near pointless music spell? (changes the music)
Strength stat affects HP rather than damage, can't shoot faster by mashing the button, can't shoot while moving, can't stack black and white magic buffs as the fighter, bosses tend to go down very quickly, you’ll keep finding items which you have a full stock of but you do leave them for later/other party members instead of wasting them here,

-
Some control issues (can't strafe, very short invincibility time, no dodge or block moves)
Some tedious parts with narrow zig-zag paths and many enemies or pointless conveyor belts
Some backtracking - teleport should've been usable by anyone
Antidote should've been an item rather than a character specific spell
Pretty dark visuals with a generic art style
Health drops are super rare (playing with a healer helps since they also heal the group with their magic, can also backtrack to the tavern to heal)
No magic descriptions in-game (each class gets a white and a black spell which requires a potion with each use)
Mortal bless isn't explained even in the manual (restores all HP - Bishop only)
Four of the attack spells do the same thing (hit all enemies on screen)
No alternate main weapons and you can't upgrade the one you have besides damage (and firing rate?)
Gets repetitive after a few dungeons, some trial & error (some one way stairs, dropped items are destroyed in just 2-3 hits - easy to do by accent as the fighter especially, invisible conveyor belts, ), no difficulty options, dropped items disappear if you move away until they’re off screen, pretty easy final boss