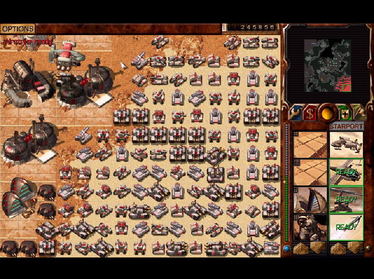 + Improved interface (multi-select, Red Alert style production menu, some new shortcuts), new soundtrack which is quite different but good in its own right, speed and difficulty options, some new objectives (capture a specific building, hold your position, one mission where base building is prevented until a certain point), sell and repair buildings/mechanical units, terrain that can only be passed by infantry

+/- Player influence is similarly limited as in the original - your teams expansion is largely unrelated to your choice in where to move next after each battle, no escort or completely base-less missions, save anywhere and any number of times per mission, no hero units

- Dated interface compared to contemporary games (no building queues, no individual menus for buildings and units, no patrol or 'attack area' move (Starcraft), can't scroll the map using the arrow keys (mapped to scrolling the sidebar production menu instead - both at the same time and at a set (too fast) speed), need to put units in Guard mode to make them react to enemies attacking neaby buildings/other units at all - no hotkey for going to the area of an event such as a unit being attacked, no hotkey for centering on a selected control group, can’t use the box-in to add several units at once to a control group, can’t double click a unit to select all units of that type on screen, etc), removes the mentats and the intro and outro cutscenes (and replaces them with cheesy live action scenes over blue screens), the game speeds up for a second after accessing the in-game menu and after saving/loading, some pathfinding problems (Red Alert engine), short (8 missions per faction) and pretty repetitive, factions are still very similar (Harkonnen has a bit of an edge with their nukes, both Atreides' air strike and Ordos' saboteur can be defended against), no control options for the carry-all (creates problems when pulling damaged units away to repair them since they will stand in place waiting to get picked up), production encounters a bottleneck in the late game (thanks to map geography (can only build on rock), not being able to create individual units at the same time from different production buildings and a time limit on the Starport after ordering a certain number of one unit (for how long is not stated)), no voice notification for when the faction specific unit/ability is ready (small red text in the upper corner instead which is easy to miss=more busywork), concrete building is still pretty slow and cumbersome (should've worked more like SimCity or Rampart), if there are enough enemy units at the entrance of a production building a finished unit inside can’t come out, harvesters will still move into enemy territory (even into their bases at times)