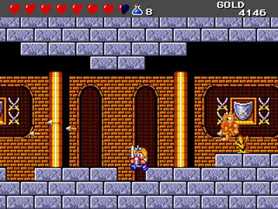 
​
+ Pick up coins right when they appear (instead of when they start moving downwards), the destructible block destroying sword (magical saber) is now a permanent upgrade for all swords (lizardman will be able to headbutt destructible blocks), new blocks that fall when hit/stepped on, larger world, rewarding to find goodies at the end of an optional (tough as nails) path, higher resolution (potentially makes gameplay more tactical when you can see more of a given area before acting, one negative though is that enemies feel less intimidating), somewhat tougher bosses overall (not the first boss or the zombie dragon), new optional final boss, four save slots (can only save in town), medicine/boomerang shop (can only buy 1 of the first (and only if you don't have any on you) and 2 of the second though), better variation in dungeons, new hidden area and character (ice world/fox man), some good platforming puzzles (the cave, the desert as Tiger/Lion man, etc.), better door handing, extended end sequence (escape - not challenging though)

+/- Uses the TG16 version assets (somewhat better ending, worse WB and Lizardman sprites, Tiger man instead of Lion man, better colors and some new background detail (boss rooms look like the ones in MW2/WBIML, slightly different music, etc.), can't duck as piranha man, fire dropped by clouds and coins dropped by enemies move a bit slower here, he pirate skeletons lack their "severed head move", enemy projectiles go through walls (but so do your sub weapons), short attack range as Mouse Man, boomerangs and medicine are quite rare here (medicine can only be found in chests or bought in the shop), higher medicine/revival potion cap (9), you can fairly easily farm for hearts in some areas (fixed enemy drops in some areas), the bosses are sometimes immune to sub weapons, enemy drops disappear after a few seconds (beware when using thunder), you'll still be affected by knockback during invincibility time, only boomerangs go through crystals

- Easy to miss the last charm stone and return door in the final dungeon (need to be piranha or hawk man for the lava part), more backtracking (for dungeon keys and healing/saving (worst parts are before the piranha man/water dungeon and before the tiger man/cave dungeon, also can't go back and forth between the room before the optional boss's gauntlet (so you can't have a save file where you only have the gauntlet and the boss left to face)); also lacks the teleport feature from the game gear version), shots from off screen, the non-heart/key chests don't refill with sub weapon ammo or medicine after you die even after restarting the .exe. (screws up the difficulty curve because if you collect everything in an area and then die you'll have a much harder time on your next try), you receive less sub weapon ammo in this version and drops (including hearts) are fixed to certain enemies in some areas (so it can take very long to collect needed items after dying considering the aforementioned problem), still can't adjust jump height, some annoying points of no return (volcanic tower - don't turn into mouse man before heading into a certain door; turn into lizardman to be able to explore the rest of the place - would've been solved by letting the player turn into any collected form at any point (not just when using certain gear)), when a door has been opened the lock on it doesn't disappear, bats are much slower in this remake, some tiling issues (some lone destructible blocks here and there that can't be destroyed, some of the town buildings, there’s a solid cactus in the desert between the two smaller pyramids, right before meka dragon there's an invisible wall to the left of the door, the wall to the right of the volcanic tower isn't solid), missing the harmful moving blocks that were in some dungeons and areas, Mouseman control bug: When you jump off checkered tiles with mouse man it's like you just jump upwards and then in mid-air you can steer (even though they're underneath you) - the only work-around is to jump once to make him "lose his grip" on the tiles (sticking to walls could've been mapped to its own button), sub weapons could've been mapped to their own button and you could've been able to cycle between them with another button instead of going into the pause menu, no sound effect for when you hit projectiles with your fire breath as lizardman, unlike in the original you can't block projectiles while swimming as Piranha Man (it's nearly impossible to survive against just a few of those yellow fishes without a bunch of sub weapon ammo!), A bit weird how you keep the legendary gear for a while after being transformed (the escape out of the castle could be more intense and challenging if vile'd made the player drop the gear right after the fight with meka dragon), no option to turn off/adjust the volume on sfx or music separately, there are quite a few places where it looks like you can go to the next screen but there's an invisible wall right at the edge or sometimes a tile away from the edge (I went out of my way several times to reach these spots only to find dead ends - one example is in the checkered tiles labyrinth before the jungle, where if you go up the wall from the outside you can't enter the next screen. It only works from the inside, which doesn't make sense), some spots where you can't avoid getting hit (like the place with severed skulls coming at you or when backtracking through the desert or when getting the first key in the forest without the right sub weapon, the water dungeon also forces you to take lots of hits if you don't have the right sub weapons and has some cheap enemy placements at the beginning of areas), it's a bit of a chore having to refill your hearts after death when healing costs so little anyway (you want to continue with the adventure ASAP after death, not stroll around in town), the progression for unlocking doors with charm stones could be a little smoother (I had found 3-4 doors before even opening the first one), uses a mixture of the SMS and TG16 versions for the prologue text (first the SMS one, then the cheesy TG16 one), no map (much larger world), save slots don't show how much time you've spent on the game or your current stats

Bugs/oversights:
-If you somehow end up behind the first form of the optional final boss it won't turn around (forcing you to kill yourself and retrying from before the yellow enemy gauntlet with 0 medicine)

-Found a slight bug with the tornado; I shoot it at an enemy, it goes past him and off-screen to the left, I fight him for a few seconds and when I continue left I hear an enemy die and the tornado pops up on the screen, swoops around a bit and then disappears. This happened in the desert.

-The boomerang doesn't always hit, sometimes it just flies through the enemy (seems like it can only hit one enemy or object at a time).

-Door bug: If you enter a transportation type door (one that teleports you without switching the sceen) in a jump, you can hold down the buttons and finish that jump when you get out, possibly saving you from falling down pits and such.

-Another bug which I discovered in the water area under the ship went like this: I bounced on a spring and entered the door leading to the room where you could either go left, back to town or right and into the water area with the tubes. What happened was I held the jump button when bouncing and when I came out I bounced up through the screen and made a bounce move inside the ground of the area with the ship, right between the ship and the yellow crab enemy. The bug can also happen if you die in a jump, so you finish the jump back in town ^_^

-Hawkman under water bug: I’m not entirely sure what activates this, but after staying under water and taking some damage both from the water and from enemies, you’ll stop taking damage from the water. This keeps on until you exit and re-enter the water. After I discovered this one, I used it to fly up the tower mentioned above because I had seen a door there as mouseman. So I fly up, switch screens and suddenly I fly through the ground in the above area.

-Go through the wall as lizard man: In the volcanic tower on the way to the dragon mail, there’s a point where you can walk up some “stairs” on the outside of the building, right where those pipes start, and you can jump out of the screen, ending up at the beginning of the tower.

When in the middle of the unwrecked ship as mouse-man, if you hop down the ledge you can't get back up again because it's too tight. I'ts not a big deal though.

I noticed you can jump from where the secret door to Polar World is and end up on top of the ledge in the east edge of town. Is this intended?

Not sure if this is a bug, but when you enter the Return Room in the pyramid, you can't exit the room back into the pyramid.