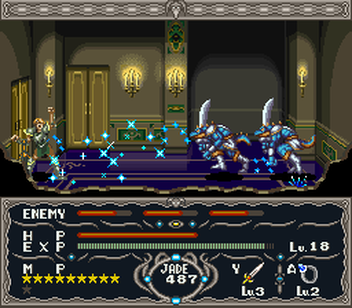 
​
​
+
Non-random encounters on the world map
Decent semi-3D graphics when traveling on the world map (first person view, pretty good framerate and the sprite scaling is somewhat improved compared to the prequel)
Zelda 2/Gargoyle's Quest style gameplay (encounters/dungeons/towns play out in a tilted view beat 'em up style with some platforming which is unusual for an ARPG (Little Ninja Brothers did something similar but only for its random encounters)
Zoomable world map (need to find the sub area map for an area first) and you start out with a compass
Pretty fast movement and combat
Can jump sideways
Good animation
Pretty nice intro and ending cutscenes plus in-game cutscenes when encountering Giza
Some nice visual touches like being able to hit the lanterns in the storehouse dungeon
Good bosses overall
Pretty good dialogue overall and there's a narrator's voice adding some flavor to the story, you occasionally get to see what the villain is doing via "meanwhile" scenes, simply touching enemies won't hurt you (Shinobi) and you can even stand briefly on some of them, can warp between visited sub areas using the warp stars on the world map (can only warp between two points at a time rather than all visited points though) - Ys IV or WB3 GG?, gear upgrades show on your avatar (Ys?), some enemies have elemental affinities, good variation of music themes in the various sub areas on the world map, basic weather and environmental effects on the world map (snow in one area, red sky near the fire cave, etc.), one dungeon is an invaded temple with some NPCs still in it (would've been cool if you could fight alongside or had to rescue some of them though),
some decent puzzles (ortah temple location, illusion forest route, moving floor illusion in the final dungeon), upgradeable inventory capacity (bag) - Zelda 3?, Golden Axe 2 style spellcasting system (hold down the button to cast a stronger spell and waste more MP once you have a lvl 2 or higer magic ring), temporary shield magic, pretty good variation overall, the dialogue of most earlier towns keeps changing throughout the course of the game, alternate solutions for some obstacles (can use either bombs or the lightning ring to destroy boulders), get tips on various item locations from the priests in green in the temples - similar to Zelda,

+/-
Save and heal at temples in towns (one slot per game though) and at one save point near the end
Partially non-linear structure (your main progress is blocked off either by objects or super though enemies though)
Can't jump nor attack while in towns
You'll auto-stab upwards at flying enemies when under them
Enemies tend to respawn as soon as you pass the room they spawned in
Short hidden timer after beating all enemies in a world map encounter - means that you'll likely miss out on some gold if the last enemy happened to drop a lot of it
Odd sfx for the fire genie boss (kinda funny)
A Link to the Past style chest mini-game (oddly you can only pay with fruit here but there are a couple of spots where you can grind for them quickly)
Equipment no longer breaks
You no longer control a party of chars here
No char stats besides attack/defense/hp/mp, many upgrades are in a hidden/unmapped location but just sort of lie around once you get to it (would've been more rewarding if they were guarded), some palette swapped enemies but later ones also tend to gain new moves, somewhat unforgiving hit detetion near platform edges, lacks the more bizarre enemies seen in the prequel, no dark rooms here, somewhat fewer alternate weapons (three of them here besides spells - boomerang, bow, bombs), no hills on the world map (mode 7?), can't use bombs while knee-deep in water, some meaningless dialogue choices (selling the pendant, "can I count on you?", ) but also one meaningful choice (helping a traveler with an MP refill pays off later on), some invincibility time when using the alternate hauza/boomerang attack (useful vs. the final boss for example),

-
​No character creation
Some trial & error (floor traps at Mt. Badel part 2?, quite hard to spot the last hidden door in the "dead end" cave and the clue here is rather vague, a couple of bombable looking walls aren't (the game still makes it seem like they are as there is an animation of them cracking slightly after one bomb), finding the Golden Sandworm - random encounter in the desert despite the clue you're given to go north into the mountains)
Grinding for money if you want to keep your gear and items up to date (ammo is also rather expensive, at one point you have to kill 100 enemies (on the world map only) to get access to a chest - it's possible to begin this sidequest much earlier than you're supposed to though)
Some control/interface issues (visited locations not already marked on a sub area map aren't added to it - makes it rather tricky to find and re-find certain locations as they tend to be small on the world map, slow turning on the world map, can't crouch to hit lower enemies with the hauza/boomerang, no quest log/journal feature, the HUD covers almost a third of the screen, getting hit stuns you for about a half a second, kinda sloppy hit detection on the world map and moving into for example a tree makes you stop rather than keep moving along its edge, turning in FP is a bit weird - you turn while moving around a point in front of you rather than turning while stationary, somewhat slow pause menu and in/out of houses+up/down stairs transitions)
Enemies keep dropping items which you already have a full stock of (such as MP early on)
Backtracking (out of dungeons - some have shortcuts though, too many dungeon trap doors which make you repeat previous segments, 1-2 dead ends in almost every dungeon), somewhat lacking sound design for the music, somewhat bland backgrounds in some places (mostly early on), your avatar looks a little odd when moving into and out of locations on the world map, mostly uninteractive backgrounds in towns, can't actually give any fruit to Karen in Hujia that you got from the mountain, no dungeon maps, world map encounters are single screen and without hazards (compared to Gargoyle's Quest or even Zelda 2 it's a bit simplistic), fairly simplistic combat (no combos or manual blocking but you do learn alternate attack moves (which cost health like in TMNT 3) and later enemies have more interesting patterns), the level scaling is a bit unbalanced at times (when a bit underleveled some areas and bosses get very hard and when a bit overleveled they get too easy), can't escape from enemy encounters on the world map, somewhat loose scrolling in scrolling dungeon segments, very small blasts from bombs, no day/night cycle on the world map here, some overly obvious clues (freezing the water in sektra temple), there's nothing much to buy with all your money in the end game,