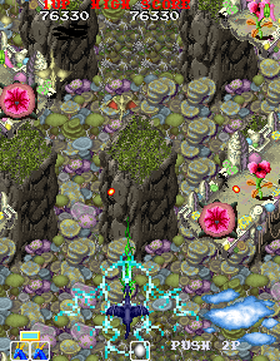 - Too hard to recover after death later on, no air to ground bomb or speed upgrades? (and the bomb rate of fire is kinda slow without additional autofire), hard to grab power ups overall, inconsistent hit detection (less forgiving around other enemies than their bullets), some tedious parts (level 4 boss), huge difficulty spike at the beginning of level 5, only three different weapon types, if you fly into a wall you tend to get stuck horizontally and lose several hit points, cheap seventh boss (counter attack) and occasional spawning points (somewhat random), some shots blend into the background in level 5