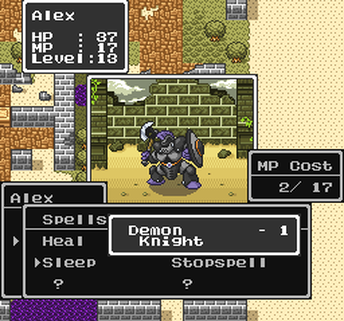 + Improved visuals and audio (the visuals are far from impressive for the SNES though), improved interface in some ways (press X to interact w/o the menu commands, automatically climb stairs, can see how a piece of gear will affect your stats and if it's equipped or owned already (except you can't see how many keys or herbs you're holding)), less grinding (higher exp and gold gains from monsters), pretty good art direction (better in battle), adds some hidden items (check pots and dressers), easier to tell if a spell was effective in battle or if you are affected by a status condition, decent dialogue overall (somewhat humourous tone), vault (deposit or withdraw items and gold in the first town), some hidden paths, holy water (turns encounters off for a short period of time) and Repel (fewer encounters for a period of time), can warp to the first castle with the wing of chimera item or Return spell (lvl 13 so a few hours in) as well as out of dungeons with Outside (lvl 12), open ended structure overall (will have to do some grinding to break from the planned path though), HP regen gear (magic armor?), some innovative level design (poison and electric (?) floor traps, town border paths), some decent puzzles (Roto's token location, Roto's armor location), two different endings (sort of, can join the villain but you end up waking up in the last visited town from a "nightmare"), save feature (three slots), in-game epilogue,

+/- Need torches to see in caves (even though you can find lit torches on the walls in some of them) - after gaining a few levels you can use a spell instead which is 4x more effective, came with a strategy guide?, level cap at 30, can't carry more than 6 medical herbs and magic keys at once, plenty of locked doors that can't be opened until a few hours into the game (and it's tedious to go to one of two specific towns to buy more keys though you can at least warp to one of them provided you have the item or spell (Return, lvl 13)), silent protagonist until the last scene with the king, automatically gain new spells when leveling up, no encounters in some caves, non-exponential experience curve after lvl 15 (possibly to make it faster to reach the expected level for the final dungeon?), keep exp and items when dying (you just lose half your gold and quest progress), no censorship in this version (religious symbols, massage/bath girl), static difficulty

- No running (fairly slow movement, no run code), locked doors respawn when leaving the area they're in, the grinding is still pretty bad (can give yourself tons of gold or levels with codes (as well as edit individual item costs) but not make enemies give something like 2x rewards), dead space (first cave), frequent random encounters (can be turned off with a code), interface issues (no item sorting without going to the vault, no cursor memory in battle, can't change the message speed in-game - top or second highest speed is good for dialogue but too fast in battle, can't examine inventory items or spells, can't buy more than one of an item at once, somewhat slow shop clerk dialogue), mostly uninteractive backgrounds (can't examine/search most things either), no in-game world map?, basic story and cliché characters, very limited inventory (can only carry ten items except for herbs and magic keys which stack (so 20 in total), quest items take up inventory space too), no party members, no battle animations, no intro cutscene, NPCs can take a while to move out of the way in narrow spaces, incorrect tip about the fairy flute in Maira/Kol (it's three steps down, not four), can only save by talking to the king, no bosses in some of the dungeons, no resting on the world map, no vehicles, no quest log or journal feature, some trial & error (Outside doesn't work in Domdora (ruined town) or regular towns, surprise attack by the golem outside Melkido and the Roto armor guardian (Demon Knight)), no diagonal movement, you'll only face one monster per battle, no MP restorative items, some fake dialogue choices (taking the princess with you in the end), somewhat bland final battle (just heal and punch),
GBC version: battles take place on a separate screen with larger battle background images (but plain white above and below the image), more zoomed in graphics, somewhat faster movement?, the rest of a town background goes black when entering a town building, ​visible golem on the world map, metal slime doesn't flee as quickly